Don't Miss
Home / Featured / Why is Russia at war with Ukraine? 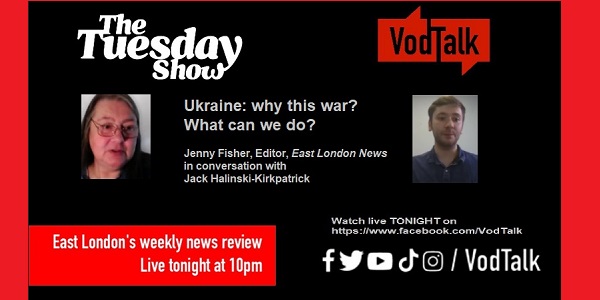 Why is Russia at war with Ukraine?

TONIGHT’S The Tuesday Show – premiered at 10pm and thereafter available on demand on the VodTalk Facebook channel – features a discussion on Ukraine between Jenny Fisher, Editor of ELN, and Jack Halinski-Kirkpatrick, who writes for the newspaper Socialist Appeal.

The discussion ranges from the causes of the war (is Putin just “evil”? did the USA provoke it?) through what western Governments should or could be doing (sanctions or weapons?) to what working people in the UK could do (take in a refugee? Camp outside the Russian embassy?).

Also covered is the hypocrisy of the UK Government which has rushed to embrace the idea of taking in Ukrainian refugees while surrounding them with hopeless bureaucracy in practice. Even more hypocritical is the warm welcome extended to Ukrainian refugees while refugees trying to cross the Channel are seen as pariahs who could change the British way of life forever.

●Join the discussion at 10pm or at your convenience:
The Tuesday Show