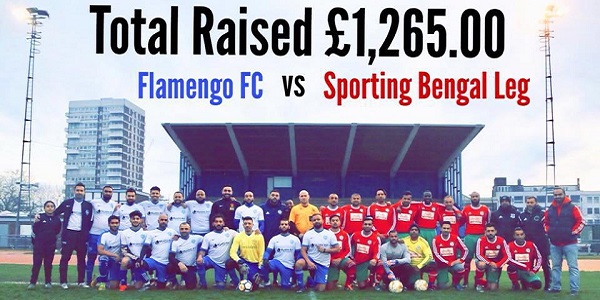 A BANK HOLIDAY SPECIAL saw Sporting Bengal and Flamengo FC face off at a cold, muddy and dreary Mile End Stadium in a special exhibition game to support orphans and vulnerable children around the world.

The match was organised to support Muslim Aid’s Child Support Programme and was a re-run of the same match played at Loftus Road last year.

Sporting Legends’ legends prepared well, with a strong squad featuring many familiar faces from the ILFL, BFA and Asian Football League. Flamengo had a clutch of players returning to full fitness.

Although it was a charity event, there was plenty of blood and thunder as Sporting ran out comfortable 4-0 winners with Israel Amadi of SYA scoring all four. The real winners were the orphans, with £1,265.00 raised for the projects that support them.

Sahir Osman from Flamengo FC said, “We thank BFA, Kick it Out, Sporting Foundation, Sporting Bengal and the Sporting Bengal Legends management team for hosting us today. It was a great game of football for a great cause.”

Sporting Foundation Chair Aroz Miah added, “This literally is about kicking a ball to save a life. Congratulations to Sporting and Flamengo for such an entertaining game today. The commitment from both teams to support such a cause speaks dividends about our community.”

•You can support the orphans by using the secure Virgin Donate link below:
http://uk.virginmoneygiving.com/team/FlamengoCharityProject