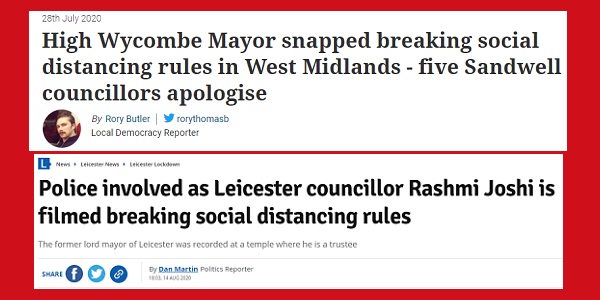 Are apologies enough when lockdown rules are broken?

AROUND THE UK Councillors have been helping local communities during the various Covid lockdowns and tier experiences. They have delivered food, helped community groups and reorganised council services (and budgets) to meet the new situation.

Sometimes, though – with so much on their minds – things have gone a bit wrong.  Some local representatives have been so busy ensuring everyone else has the services they need to keep the community safe that they have forgotten to keep to the rules themselves.

A gathering last summer saw the Mayor of High Wycombe in hot water when photographs of the event showed that he was not observing social distancing. The Mayor, Cllr Mazamal Hussain, explained that he was on council duties. He had gone to Birmingham to discuss problems being experienced by the Pakistani community in travelling to Pakistan during the pandemic. 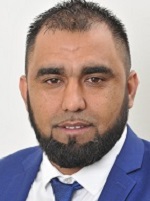 However, a photograph taken that day appeared to show him standing among a group of 17 men after a dinner organised by the Overseas Pakistani Welfare Council at a Birmingham restaurant. Mayor Hussain, who was elected as a Conservative Councillor, said that he hadn’t realised someone was standing behind him when the photo was being taken.

Five Labour councillors who represent wards in the Sandwell area of Birmingham were also present. They said they had gone to a meeting to discuss “urgent community issues” and that they had been told that social distancing would be observed. They regretted that this had not been the case throughout the whole meeting. They were reprimanded by the Sandwell Council Leader and the Labour Group Whip and issued a statement offering “profuse apologies” to the residents they represent. There are reports that all five represented areas which had seen high levels of Covid infection at the time of the incident. 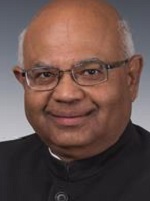 Later in the summer Leicester Labour Councillor Rashmi Joshi – a former Lord Mayor of Leicester – was recorded attending a temple, where he is a trustee.  Witnesses claimed that he had taken part in a religious ceremony where social distancing was not observed. It was the third time unlucky for Labour in Leicester. Cllr Joshi’s alleged misdemeanour came after fellow Labour Leicester Councillor Ruma Ali had to apologise after holding a barbecue in her garden to mark Eid. Leicester Mayor Peter Soulsby had earlier issued an apology for visiting the home of his partner, five miles from his own home, during lockdown restrictions.

Any breach of the rules is annoying – but it perhaps even more so when it is done by public representatives who are elected (and remunerated) to support residents who are observing the letter and the spirit of the regulations. Although the above examples are primary transgressions by Labour politicians, the most famous elastic interpretation of the rules came from Conservative Prime Minister Boris Johnson’s non-elected political adviser.

Dominic Cummings came up with complex explanations for his travel from London to Durham and back, via local sites of attraction, during the 2020 lockdown. The cover stories held for a while, but Cummings left his post some months later. Whether their explanations and apologies will save the Sandwell and Leicester politicians’ careers remains to be seen.

The very least the public will wish to see is that all elected politicians – from all parties, from all ethnic backgrounds – are treated the same and that they all give public apologies for committing any transgressions they ask the rest of us to avoid.

2021-02-07
admin1
Previous: Sword seized after drug detention in Whitechapel
Next: Sounds on Sunday: 50 years ago/4