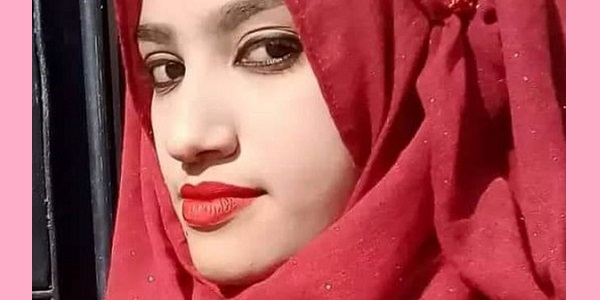 NUSRAT JAHAN RAFI was just 19 when she was lured up to the roof of her Islamic school, doused with kerosene and set on fire. Now 16 people have been charged with criminal offences in connection with this murder.

On 27th March this young woman had filed a police complaint against her headteacher, Siraj Ud Doula – which led to him being arrested and held in prison. Nusrat said that he had called her into his office and then touched her inappropriately – until she ran away.

Police believe that the headteacher used go-betweens to put pressure on her to withdraw her allegations and she refused. They believe he then instructed his associates to murder her, as an act of revenge. It seems that the associates concocted a detailed plan to carry out the head’s orders: some of them buying burkas to use as a disguise and kerosene; others drawing up lists of who would be look-outs at various key points and who would do the murder.

On 6th April Nusrat went to school to sit her final exams. She was lured up to the roof by a group of people wearing burkas. Police believe that they hoped to make the murder look like a suicide. Nusrat suffering burns to 80% of her body – but before she died, four days later, she managed to give a statement to police.

So horrific was this revenge attack that people took to the streets in Bangladesh in protest. What happened to Nusrat herself was bad enough – but her fate would discourage other young women from reporting harassment. Bangladeshi Prime Minister Sheikh Hasina responded to the protests by promising that everyone involved in the killing would be face due legal process and no one would escape justice.

Those now facing criminal charges include the police officer who filmed Nusrat making her statement of complaint – and circulated the film on social media. Nusrat can be seen in distress as she describes what happened, often trying to hide her face in her hands. The police officer interviewing her can be heard saying that the complaint is “no big deal”. The officer has been charged with making an unlawful recording of Nusrat’s statement and posting it online.

Police have called for all 16 charged to be given the death penalty and said that twelve of the 16 have confessed.

2019-05-29
admin1
Previous: Stabbing victims survive mystery brawl in Romford
Next: Police save us from unexploded bauble