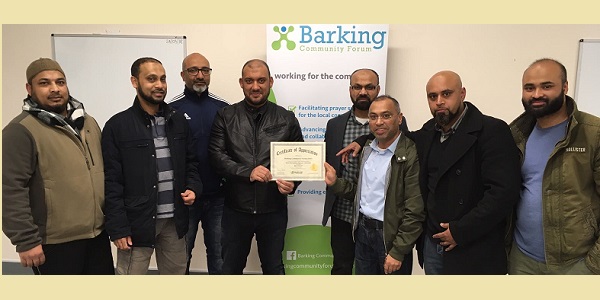 THE BARKING COMMUNITY FORUM (BCF) raised £2,170.39 from Friday Jumauh prayers which took place at the Hedgecock Community Centre. The funds will go towards the Syria Emergency Appeal for Ghouta.

UK charity Muslim Aid has launched a Syria Emergency Appeal in response to the unfolding catastrophe in Eastern Ghouta, where the death toll and numbers of injured continue to rise.

The people of Eastern Ghouta, an area on the outskirts of Damascus, have been left trapped and terrified, as they experience the worst series of bombardments in the years since the area has been under siege, according to aid workers Muslim Aid has spoken to on the ground.

Muslim Aid’s Director of International Programmes, Imtiaz Mohammed, has been in contact with partner organisations in the country to assess programme needs for shelter, food and water and medical supplies.

He said, “This could the worst atrocity so far in the protracted conflict in Syria. The bombing has been relentless and people have nowhere to hide. They are without any nourishment and many of the injured cannot get to clinics.”

Unprecedented levels of airstrikes and shelling have left hundreds of people dead and many others have been injured. Muslim Aid is appealing to the public to give generously to the Syria Emergency Appeal as about 400,000 people live in the area of Eastern Ghouta and medical experts say 12% of children under five years old are acutely malnourished.

The charity has been responding to the humanitarian crisis in Syria since the fighting began seven years ago, providing food, water and medical supplies. Muslim Aid is also sponsoring education and healthcare programmes, including support to an emergency hospital in Bab Al Hawa in Idlib District, close to the Syrian-Turkish border.

Naz Ali, Media & Marketing lead for BCF, commented, “We are a very charitable community here and we take our social responsibilities very seriously, whether it is working with homeless citizens, doing a park clean up, elderly care or an international situation. The situation in Syria is beyond tragic and we wanted to contribute to the vital aid efforts necessary to support the stricken people of Ghouta. We hope this small gesture will inspire other communities to do the same.”

•For more information about Muslim Aid’s operation in Syria, please contact Eileen Maybin at eileen.maybin@muslimaid.org or on 07769 689438.

•Read more about it:
Iftar 1k campaign launched for Syria
The war and the misery continue in Syria