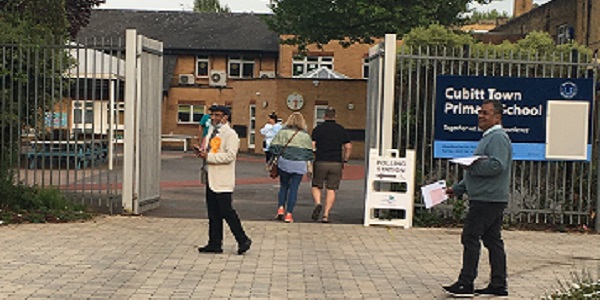 All was quiet at the polling stations...

TONY BLAIR, at his most unpopular, was dubbed Labour’s “Liar-bility”. On polling day 2022 in Tower Hamlets, it was a name given to Executive Mayor John Biggs – by a Labour campaigner.

Adam Allnut, Labour’s candidate in Canary Wharf, leads his band of supporters back to the polling station.

One Labour member, even as he handed out leaflets to incoming voters, was saying that Lutfur Rahman had a jolly good manifesto – so good, in fact, that the Labour Party member had voted for Rahman and Aspire. On the other hand, one Labour candidate was asked if voters should re-elect John Biggs so that he could cut some more services and replied saying, absolutely yes, this is exactly what voters should do.  The candidate volunteered that as well as welcoming the cuts in services, which were all down to the Labour Government anyway, it was important to make sure Jeremy Corbyn never got back into the Labour Party.  (Actually, Jeremy Corbyn was allowed back into the Labour Party many months ago. Starmer has put a block on allowing him to be a Labour MP again.)

On the other hand, some voters were coming up to Labour candidates who were standing a second or third time and saying that they would support them.  This could be a problem for Aspire, who have been canvassing for at least a year but have not been well known in their wards for as long as the sitting Labour Councillors. However, not many outgoing Labour Councillors are standing again in the wards where they have been councillors, and Labour’s newer faces may struggle to be elected against strong opposition.

Aspire were out in large numbers knocking up their voters.  There were few Labour candidates or activists to be seen on the estates. Some Aspire activists, perhaps new to polling day operations, were a little hesitant about covering all directions from which people would head to a polling station and seemed shy to hand out leaflets to incoming voters.

There were a few Lib-Dem members outside polling stations, and it seems unlikely that their candidates will haul in many votes for Rabina Khan’s mayoral campaign. Ex-Tory Andrew Wood, standing in Canary Wharf ward as an independent, stood resolutely outside Seven Mills polling station.  The man is so independent, it seems that he could only cover one polling station. That’s what purity – or is it belated opportunism? – does for you.  Sorry, Andrew.  At least you have a lot of support on Facebook. And more support than the Tories, who did not seem to be covering as many polling stations as Andrew Wood managed.

Can we call it?  No, we can’t.  All we can say is that from what our reporters saw at polling stations today, your victory thank you leaflet will probably be coming from Aspire Mayor Lutfur Rahman – and quite a few Aspire councillors. Expect this to be quickly followed by a leaflet from Labour, telling the voters why you got it wrong again.

What happens at the Count?
Counting begins on Friday morning. It seems that turnout at polling stations on polling day was low – maybe around 40% instead of the more usual 50%..  The number of postal votes issued and returned is high.  Postal votes which arrived at the Town Hall in the run up to polling day have already had their signatures and dates of birth checked.  Some postal votes will have been handed in at polling stations, and these will be checked at the count.  These two factors mean that it should be possible to complete the verification and checking in four to five hours.

Once votes have been verified or checked, they will be separated into mayoral votes (votes from all the wards will be put together) and councillor votes (these ballot papers will be kept together as a ward, of course).  The mayoral votes will then be counted, and the result is expected by early evening.  It will come sooner if there is a result on the first round – but it doesn’t take that long to do a second count, as the number of relevant second preferences will be fairly small.  The result should be known by mid-evening at the latest – even in Tower Hamlets, with its history of being last in the world to declare a result, etc.

Counting of the votes for councillors begins on Saturday, with the results being announced ward by ward, as they are completed.  Expect the small wards to declare first.

●Watch the VodTalk Facebook page for regular reports and updates during Friday and Saturday.
VodTalk