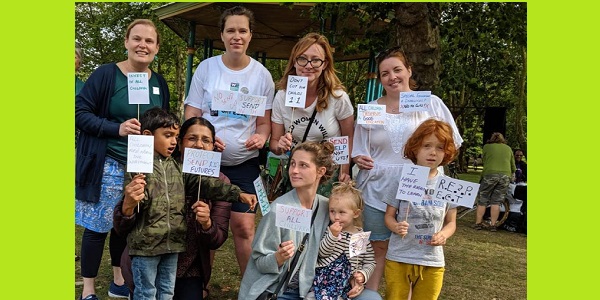 JOHN BIGGS – Executive Mayor of Tower Hamlets – has decided to cut the amount of money spent on Children with Special Educational Needs and Disabilities (SEND). And now he’s consulting the public on how to do it.

As usual, the online “consultation” exercise has three major flaws:
•it it accompanied by a lengthy Council-style report which lay members of the public will find hard to follow;
•it limits those being consulted to choosing between set cuts options (though this has been mitigated somewhat by giving an email address to which comments can be sent);
•it dresses the cuts options up as if they were service improvements.

It’s not a small problem: 8,000 young people aged two to 25 have SEND needs. The Council also reveals that 3,000 youngsters have a formal Education, Health and Care Plan (EHCP) – though it is not clear if these 3,000 are part of or in addition to the 8,000 young people otherwise classed as “SEND”.

Last financial year (2018/19), the Council says, it received £49.7 million from the Government to fund SEND provision – but it spent over £56 million. Given that we are always being told that the Council has to set a balanced budget, it is not clear how this level of overspend can occur. What the Council does say is that it needs to cut spending on SEND and/or other education budgets so that the overspend does not occur again – or even so that there are under-spends which can eventually cancel out the overspends (again, it’s not clear).

The consultation has brought together a coalition of parents, concerned residents and those who work in education in Tower Hamlets. They have formed SEND Crisis Tower Hamlets, which will be working to persuade the Council not to force children with special needs to pay for the overspend and cuts in government funding. The Campaign is calling on other residents to help them.

•For information from Tower Hamlets Council and to complete their consultation questionnaire, go to:
Council questionnaire

•To send your comments to the consultation, email:
Send.Strategy@towerhamlets.gov.uk

•To read the SEND Crisis Tower Hamlets advice on how to fill out the consultation survey, go to:
Advice on completing the questionnaire

•To sign the campaigners’ petition, go to:
Anti-SEND cuts petition

•Read more about it:
Crowds sign up to stop nursery closures
Biggs upset on nurseries as “councillors say no”