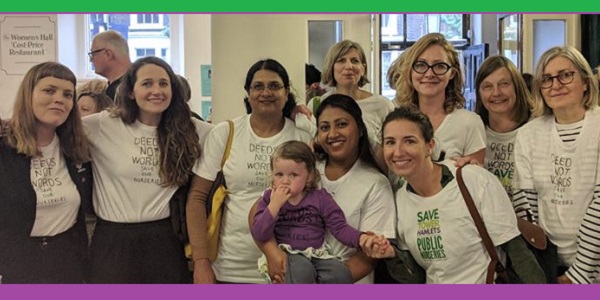 Campaigners have been working to keep the nurseries open for months.

IT WAS A resounding “no” to nursery closures as Save Our Nurseries campaigners went out and about in Tower Hamlets on Saturday, explaining to members of the public that Executive Mayor John Biggs wants to close the Council’s last three remaining day care nurseries.

“Not a single member of the public that we spoke to supported closing the Council nurseries,” explained a spokesperson for the Campaign. “The Council says that children from the nurseries can fill up the empty places in the borough’s nursery schools – but mums we spoke to seemed to understand the difference between a day care nursery and a nursery class in a school.”

The Campaign expressed concern that Councillors – who may be able to influence John Biggs’s decision on closure – did not understand that children cannot attend nursery schools or classes from the age of six months (at which age they can go to day care nurseries). As part of the education sector, nursery schools and classes operate in term-time only, for the length of a school day. They are not generally suitable for parents who need full-time child care all year round.

Some nursery schools or classes open early or are looking to offer after-school sessions. However, not all schools and classes have these arrangements in place. Where they are introduced, they are likely to be run with different staff from the ones working during the school day – so small children will lose that continuity of care throughout the day.

“It is hard to find a less popular policy than closing the day care nurseries,” said a campaign spokesperson. “We thought that the Mayor awarding his senior councillors pay rises was bad enough – but this one’s really going down badly. People are signing our online petition and also recording their opposition to closure at our street stalls.”