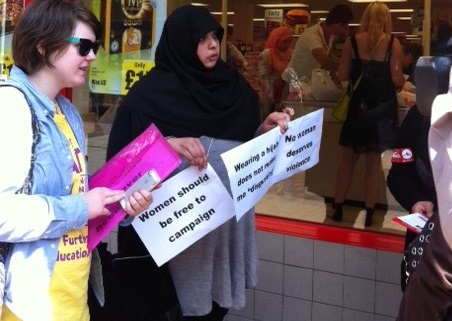 Labour is today under the spotlight as one of their campaigners hurled verbal abuse at a young female pro-Lutfur Rahman campaigner in Chrisp Street market.

ELN has seen a photo of the pro-Biggs campaigner, taken just after the alleged abuse, speaking with a sitting Labour Councillor – who has refused to identify him to the pro-Lutfur campaigners who were making a report to the police.

Other key Labour figures have either refused to co-operate or respond or have stalled over doing so.

Women who witnessed the abuse and other pro-Rahman campaigners held a brief lunchtime demonstration in Chrisp Street today in protest at Labour’s response.