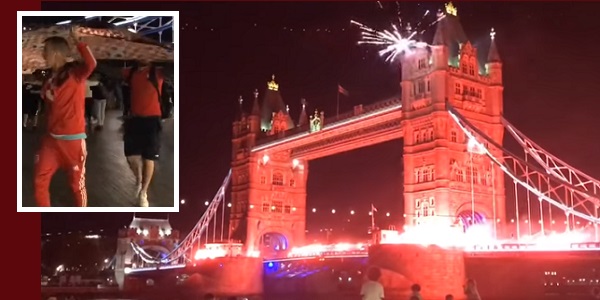 It’s hard to piece together quite what had happened, but it seems that while most of the UK press were focussed on the delayed Arsenal -v- Chelsea FA Cup Final, Chabab Belouizdad FC had been declared winners of the Algerian “Ligue 1” – on the basis of games played up to March.

It was almost equally hard to piece together what was happening in London. It began with a crowd of exuberant fans making their way to Tower Bridge, where they staged a firework display. When the fireworks ended, the crowd – perhaps around 100 young men – made their way down to the Embankment. 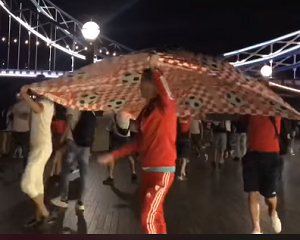 Many of them were dressed in red and white. Many of them were taking selfies. Almost all of them were singing and chanting. They were clearly happy, but what united them? Then, in the middle of the procession, came a man waving a large flag with Chabab Belouizdad’s initials and logo on it, and passers by were able to identify what this was all about (once they had googled the initials, in most cases).

The police were caught by surprise. The supporters had the run of Tower Bridge for several minutes – long enough to run a respectable firework display. As the crowd made its way, out of sight but not out of earshot, down the Embankment, a single squad car turned up – and police officers tried to work out what had been going on and what they should now do about it.

Up on the Bridge, officers guarded a blazing cardboard box, presumably left over from the firework display. Minutes later, a fire engine, sirens blazing and lights flashing, moved through the traffic on Embankment, presumably heading towards the box so they could deal with the blaze. Police reinforcements turned up.

A boat – it wasn’t clear whose, but it looked official – turned up and stopped under Tower Bridge, its staff communicating with police officers above their heads. Passers by waited to be moved on by police officers muttering “move along now, there’s nothing to see”, but the officers kept themselves to themselves, and members of the public moved on anyway, because by then there really was nothing to see.

Fortunately, it seems that it all ended well. We can only hope that the police (and fire brigade) were not delayed by their trip to Tower Bridge from attending any other emergency calls. There wasn’t a great deal of social distancing evident among the rejoicing Chabab Belouizdad men (had the women had a better offer?). It was, if you stopped to think about it, a chilling reminder of how little security there is at some of London’s landmarks.

What was so refreshing was that it was all so normal: team wins, go out and celebrate. It was, however, also really quite unusual. No one would have been surprised to see Arsenal supporters out celebrating or to come across Chelsea supporters drowning their sorrows and forgiving Lampard.  But to find an immigrant community proud to come together and make part of central London the backdrop to their expat celebrations – that displayed a confidence that is rare and can perhaps only be driven by the beautiful game. Joy is infectious. Chabab Belouizdad: you are welcome back – any time.