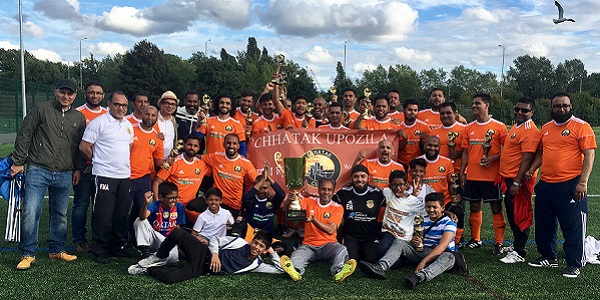 CHATTAK HAVE BEEN crowned Sonali Othith Greater Sylhet Cup champions for the very first time. The Mile End outfit broke the monopoly of the great Osmani Nagar team which have won the previous two tournaments.

An entertaining morning of group games was followed by the knockout stages, where the culmination of a tense set of quarter finals pitted Beanibazar with Osmani Nagar. The champions had a player sent off, and with the second half still to play it seemed Beanibazar would break their semi final hoodoo and make the final. Resilient Osmani Nagar, however, closed up shop and held their nerve to win a tense penalty shootout.

Chattak won their semi, with Nabigonj and the Stone Men decked in bright orange. They continued their good form into the final, where a close knit affair saw both teams squander a host of good chances. As the referee blew for time, both teams entered the lottery of penalty kicks.

This time, though, Osmani Nagar were unable to repeat their semi final exploits, and the feted Rashid Ali missed a penalty as former East Londoner turned Brummie Shuyel Miah made a crucial save. It was all left to Jewel Miah, and the canny forward despatched his penalty with ease past Shumon Chowdhury to give Chattak the title.

As wild celebrations ensued, Co-manager Goyas Miah, the very first Sporting Bengal Captain, commented, “We played with our hearts all day. Right from the off we had a particular game plan in mind and the players executed it to perfection throughout the day. It was a unique experience for me to lead from the touchline after so many years of being on the field of play. It’s so much more stressful. The victory, though, is sweeter!”

Goyas’s Co-manager Shiraz Miah lifted the Bangla Media Cup in 2017. He joked, “I’m getting a taste for success and it’s getting better each time. Today has been a momentous day for us and all our hard work has paid off. I want to thank the team, our management and our supporters who were massive in us lifting the Greater Sylhet Cup today.”

Sonali Othith Chair Jamal Uddin concluded, “The football community has won here today and once again our footballers have been a great advert for not only the game but our community too, as they will inspire the next generation of youngsters to stay away from trouble and be involved in sports. The team at Sonali Othith are very pleased to have played a big part in this.”

Chattak goalkeeper Shuyel Miah was named man of the tournament.

•The Greater Sylhet Cup is an annual event of teams formed from grassroots footballers representing their own or their parents’ origin team from Sylhet in Bangladesh. The UK, in particular east London, boasts a sizeable British Sylheti community which operates a number of grassroots football management bodies which deliver twice weekly football league and Cup events throughout the year.