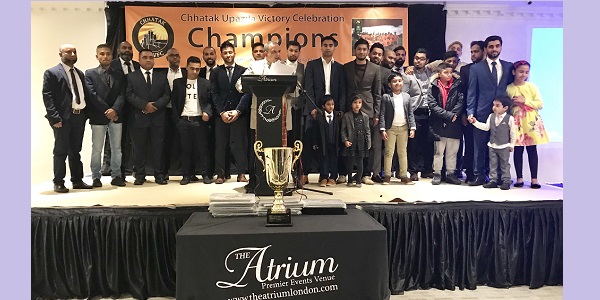 The local football community turned out in force as Whitechapel-based Chattak FC held a victory reception at The Atrium, Brick Lane to commemorate their fairytale success in the 2017 Greater Sylhet Cup.

The evening started with a film presentation of the team’s journey to the title and included footage of pre-tournament meetings, social gatherings and get-togethers as well as footage from the day of the tournament as Chattak – against all odds – went on to lift the trophy. The programme was conducted by Sonali Othith Secretary Joynal Abdin.

Chattak Chair Faruque Mahfuz Ahmed thanked everyone for their attendance and called on Sonali Othith Chair Jamal Uddin who commented, “This tournament took us to different heights in terms of football standards and excellence.”

Bangladesh Football Association Chair Aroz Miah added, “I’d like to thank everyone for turning up to celebrate what is ultimately a great community achievement.”

Councillor Maium Miah said, “Over the years Chattak as a football team have been going from strength to strength. This is a historic moment for our team and it’s a proud and delightful moment for us. There’s much to do in terms of promoting Chattak. I would like to thank everybody from the bottom of my heart for helping us reach such heights.”

Councillor Mahbub Alam thanked the community for supporting the team. He said, “This is a dream that can only get bigger and better. We should all be immensely proud of what the boys have achieved.”

The Beanibazar Sporting Club Chair congratulated the champions, saying, “The team displayed grit and determination and the unity and bond within the squad was a major factor in their success.”

British Bangladeshi Power & Inspiration co-founder Abdal Ullah spoke of the benefits of football for veterans, saying, “Thank you to everyone for this amazing tournament and hopefully this will encourage our community to get more active and improve their lifestyle through healthier living.”

Joint Chattak managers Shiraz Miah and Goyas Miah were asked to recap on their special day, “It was a great honour for us and it is a memory that we will cherish forever,” said Shiraz.

Goyas concluded, saying, “Our grand entrance at the start of the day really put us on the map. We had a slow start and made it through the group stages. The knockouts were tactically played and straight after the semi win we faced the two times winners Osmani Nagar. The rest is history and this achievement is amongst the greatest we have achieved on a football field. Well done to everyone – we achieved this as a team.”