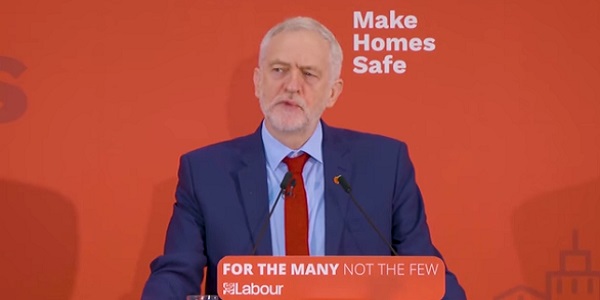 Corbyn pledges to house the homeless

JEREMY CORBYN has announced plans to tackle homelessness – with the first target being an emergency acquisition of 8,000 properties to accommodate people who are sleeping on the streets.

The Labour Leader was speaking on BBC1’s Andrew Marr Show at lunchtime on Sunday. Tory MP David Lidington, Minister for the Cabinet Office, quickly came back on the Corbyn proposals.

He said there were many reasons why people were sleeping on the streets. Some had mental health issues and/or drug and alcohol problems. He pointed out that the Government had adopted an “ambitious target”: to eliminate rough sleeping over the next decade. Corbyn countered with a rather more practical strategy based on homes, not targets.

A Labour Party spokesperson later said that the Party would try, in the first instance, to obtain the 8,000 emergency properties from housing associations – to accommodate the homeless while Council homes were built. A Labour Government would help housing associations to build new properties too – so they should be able to replace any homes taken by the homeless in early course.

This emergency action would be followed by requiring Councils to build more homes to be let on lifetime secure tenancies at social rent and more control of the private sector to end exorbitant rents and poor conditions.

Jeremy Corbyn also spoke about giving Councils the power to take over empty properties. He made it clear that he was not threatening to take over second homes or homes that were empty because the owner was in long term care or working away from home. What he wants to put a stop to is the situation where speculators build or buy houses intending to keep them empty – because they can’t be bothered to let them out and want to rely on increasing house prices to show a book-balance profit.

Jeremy Corbyn said a Labour Government, “would give local authorities the power to take over deliberately kept empty properties, because there is something grossly insulting about the idea you would build some luxury block and deliberately keep it empty. Surely we have to have a social objective and a social priority in our society?”

The numbers of people “rough sleeping” – that is, sleeping out on the streets – has risen for the last seven years. Over the last five years it has doubled.  Labour is keen to take emergency action to offer them homes, but this is not an empty humanitarian gesture. Of course there are some homeless people who do not want to be encased in four walls – but there are many more who are desperate to find a home.

Once they find a home, people currently homeless will have a base from which they can look for a job – and begin paying tax and rent.  They are less likely to be ill and need emergency health or social care. Homelessness is a waste of money as well as a waste of lives.

•Read more about it:
Corbyn sticks to script amid Tory disarray
Corbyn furious as Tories fail us on NHS