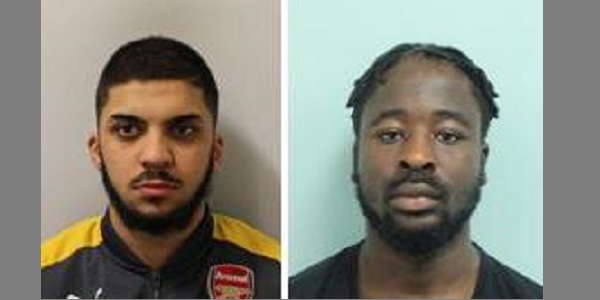 TWO MEN FROM Hackney have been sent to prison after being found guilty of a range of charges arising out of incident which took place in Ilford on 4th August last year.

Kwame Kwateng, 23, from Lindisfarne Way, Hackney, had pleaded guilty to violent disorder and obstruction of a drugs search and was sentenced to two years and eight months.

The incident took place at around 6.20am, as the two were leaving a nightclub. They were in Thompson Close, Ilford – when they set upon two men who were sat in their car. The men, aged 24 and 29, were dragged out of their car and attacked.

The incident was captured on CCTV. Kaynakkan was filmed wearing a balaclava: he had a machete, while Kwateng was using a metal pole as a weapon, hitting one of the fleeing victims with it. Both men were arrested on 11th October, after a police investigation.

Detective Constable Marcus Snook of the Metropolitan Police Trident and Area Crime Command said, “This was a shocking act of violence committed against two unsuspecting and unarmed victims. Kaynakkan and Kwateng are not only culpable for carrying out this violent attack but also acted with complete disregard for the safety of other innocent members of the public in the area.

“It is clear that Kaynakkan and Kwateng are a serious danger to the public. Their actions on the day of the attack were cowardly and reckless beyond belief. As can be seen from the CCTV footage, it is only by extreme good fortune that the victims did not sustain serious injuries as a result of the defendants’ actions.

“The fact that a firearm – with ammunition – and a large quantity of cocaine and heroin were discovered at Kaynnakan’s home address sheds further light on his criminal activities and evidences the serious danger he poses to the general public.

“The witnesses who came forward to assist police not only showed great strength of character, but also demonstrated their commitment to assisting police in removing violent criminals from their community, and to them we are extremely grateful.”