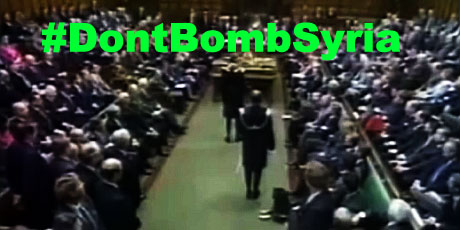 Prime Minister David Cameron has announced that the House of Commons will vote tomorrow, Wednesday 2nd December, on whether to “bomb Syria”. The Stop the War Coalition has called an emergency protest this evening: assemble from 6pm in Parliament Square for a rally (speakers include Richard Burgon MP, Salma Yaqoob, Lindsey German and Sabby Dhalu), before marching to the nearby Tory and Labour Party HQs.

Before or after this evening’s protest, you can help by lobbying your MP via the Stop the War website or by emailing them direct. If you have already done this, please do it again. You can also email Labour MPs who have indicated that they will be voting with the Tory Government tomorrow.

•For more information about the campaign to stop the bombing, go to:
http://stopwar.org.uk

2015-12-01
admin1
Previous: Not enough cooks to spoil the broth
Next: Human Relief sends a Smile with Santa