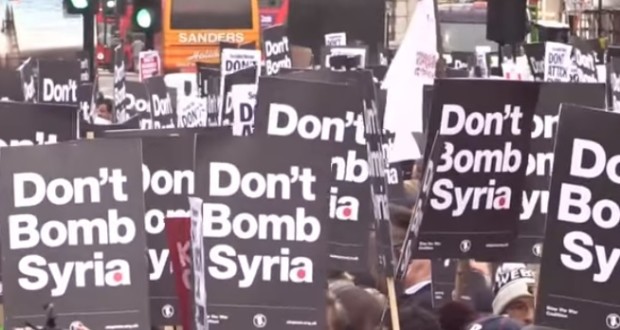 Silence is complicity: so today it is time for you to take a few minutes to help save lives and make the world a safer place.

In the coming week, the Government seems certain to ask the House of Commons to consent to “bomb Syria”. It’s a strange way of putting it – as if it was a question of whether we are old enough, brave enough, mature enough to do this difficult grown-up thing. If the question being put to our elected representatives was “do you want to slaughter an unlimited number of human beings?” perhaps they would give the matter more thought.

If it wasn’t just a question of filing through the “Aye” or the “Noe” lobby in the House of Commons and getting someone else to pull the trigger, perhaps a few more would find this decision more distasteful. Perhaps we should make MPs see the consequences of the decisions they take on those green leather benches. We could take them on buses down to the drone shooting gallery… “This way, this way, Mr Cameron – now just line the sights up and push this button and… Oh well done, Mr Cameron, sir – you hit the target spot on. We’ve just identified it as a school, but you know how those pesky terrorists sneak into these civilian institutions. You score one terrorist suspect, 30 children and a teacher. Perhaps you’d like to pop a box of tissues in your next overseas aid package so the mothers can wipe away their tears? Now, your turn Mrs May…”

What is the Government hoping to achieve by “bombing Syria”? The answer is that it is hoping to achieve more at home than overseas. “Bombing” will make it look tough and determined to the UK electorate. It will help it shore up an alliance of western powers that are still looking to rule the world. It will require more spending on weapons, channelling more public money into private hands. What’s not to like?

What’s not to like, of course, is that this short-term, macho aggression will not be successful and will make matters worse.

Daesh are building support on the basis that western countries are anti-Muslim. The more the West attacks it, the more that case is made. If “bombing” is the strategy, the West will have to bomb to death all the Daesh members and sympathisers in occupied Syria – and then all the semi-sympathisers who are won over by seeing the bombing. Again “bombing” is a euphemism for “killing”: the West’s strategy to beat Daesh is, in essence, to kill all its members while not admitting that the massacres will draw in more supporters.

Even if the West was successful in doing this, there are plenty of other places where extremist terror organisations could grow (not least of which are the countries which the West has invaded and occupied in recent years).

How long would it take to eradicate the threat (in other words, kill all the non-compliant Muslims)? It could be months: but there would certainly be enough time for several terror attacks against the western population to take place in the meantime. If the West is bombing Syria, is that likely to make Daesh High Command call back the suicide bombers – or is it more likely that Daesh will be provoked to mount an all-out terror war on European soil?

All killing is wrong and all terror is wrong – whether it’s a bunch of hi-jackers armed with knives, or the US firing off Cruise missiles; whether it’s the army of the Israeli state bombing Gaza to pieces or whether it’s half a dozen heavily armed men running riot in Paris.

There has to be an alternative.

First, the group which styles iself “ISIS” has to be disowned by Muslims across the world – and in return the West has to recognise that Muslims are not second class citizens of the world and educate its people to eradicate Islamaphobia.

Second, although only by a split second, the West has to tackle the problem at the root of this conflict: the occupation of Palestine by the Israeli state, in contravention of several international laws and rulings of International Courts. Anti-semitism has to be eradicated just as much as Islamaphobia – but that cannot happen while the Israeli state treats the Palestinians with such barbarity. If the West can afford to give up the South African apartheid state, so too it will have to bring itself to give up the Zionist apartheid state too.

Third, the West will have to work with the world’s Muslim states to bring about pace in the Middle East. That is “work with” the states, not try to use them as pawns in the fight between the western superpowers for world domination.

The West – including the UK and David Cameron – must realise and admit that no nation or group of nations has the right to dominate the world. Life is too short to waste it on someone else’s giant game of who rules the playground. Bomb Syria? Not in our name!

Act now: help bring an end to this war
•Jeremy Corbyn has realised the sense of the above – and he needs the support of the public to counter the pressure from his detractors.
•Rushanara Ali MP and Jim Fitzpatrick MP will take the views of their constituents into account before they vote.