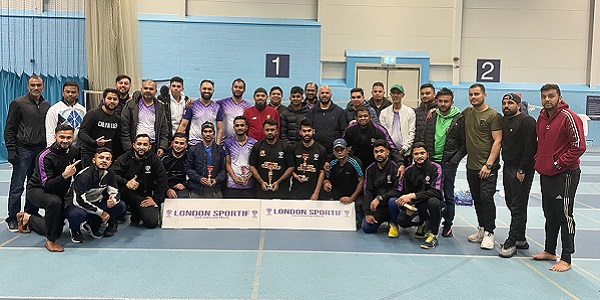 The Doubles pair of Enayet Hossain and Md Jubayrul Miton beat Md Shahin and Fahim Ahmed to emerge as the champions of the London Sportif Gala Badminton Championships.

The internal tournament was held at Newham Leisure Centre and involved over 50 members and club officials.

The popular tournament has been running since 2017. London Sportif organise weekly badminton sessions in various East London locations, and the club introduced the tournament to measure development of participants while encouraging a strong sense of robust competition among the players.

London Sportif have received widespread praise for the excellent way they engage members of the community while promoting healthy lifestyles at the sametime. The project has been such a success that it has been replicated all over the UK.

Medals, trophies and prizes were handed out by Ekota Academy Head Coach Emdad Rahman MBE, and a small celebratory dinner was arranged.

Tournament Co-ordinator Muhi Mikdaad, who started this tournament with three people in Walthamstow and Blackheath, commented, “London Sportif have been running such events for almost five years now. Our vision was to use sports to promote health, unity and fun. I think we are doing well and pleased with our progress.”

Club Treasurer Atikur Rahman, a member of the  London Sportif Board of Directors, added, “We engage hundreds of players and are committed to continuing our work to involve players at all levels, be they complete newcomers or semi-professionals.”

Emdad Rahman MBE concluded, “I have really enjoyed the games tonight. The crowd were very friendly, the competition fierce and the atmosphere electric. Well done to the Sportif volunteers for arranging such an excellent showpiece event.”

●For more information, go to:
www.londonsportif.com