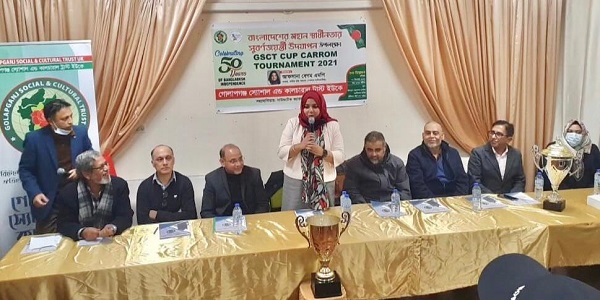 THE GOLAPGANJ Social and Cultural Trust UK (GSCT) organised the Cup Carrom Tournament 2021 to mark the Golden Jubilee of the great independence of Bangladesh. It was a great initiative, taken for the first time by this organisation.

At the opening of the ceremony the Qu’ran was recited by Abdul Hannan. The speeches of welcome were given by Sports Secretary  Kamruzzaman Chaklader, Joint Secretary, Misbah Masum; Joint Treasurer, Kawser Ahmed Joglu; Organising Secretary, Fokhrul Islam; Cultural Secretary Kamal Uddin; Membership Secretary, Amzad Hussain and Ali Amzad Chowdhury Husssin. The GSCT was joined by the chief guest Apsana Begum MP. She gave a wonderful speech and expressed her high regard for the initiative of the sport.

The tournament final was completed on Thursday, 16th December in the local community hall. The chief guest on that occasion was Cllr Ahbab Hussain, Speaker of Tower Hamlets Council, with Cllr Shah Suhel Amin; the GSCT Acting Chair, Showkot Ali; Secretary Delwar Hussain; and many other distinguished guests.

The winners’ prize money was £500, and they were presented with a trophy by the chief guests. There were many distinguished speakers. It was a wonderful evening, ending with beautiful inspirational speeches.

2021-12-18
admin1
Previous: Doubles success at London Sportif badminton tournament
Next: The Met: safe in the hands of the high-ups?