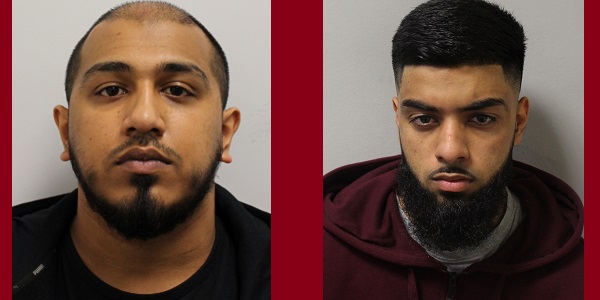 TWO MEN HAVE BEEN convicted of offences connected with the death of Titu Miah in an incident in Plashet Road on 12th October last year, during which a 16 year old boy was wounded.

Just before 3.30pm the police received a phone call saying that a man had been stabbed. Police and the London Ambulance Service attended and found a 16 year old boy who had stab wounds in his leg and chest. He received treatment in hospital and on his release he was arrested on suspicion of violent disorder. He was later released on the basis that no further action would be taken against him – as were four other men who had been arrested on suspicion of committing Grievous Bodily Harm during the incident.

At around 4pm, police were told that a 31 year old man had arrived at an East London hospital with a fractured skull. He was identified as Titu Miah, 31, of Plaistow. He remained in hospital for five days and later died of his head injury.

The Court was told that the 16 year old boy was in Plashet Road with a group of friends when a Mercedes drove up. In it were Titu Miah and his stepson Yasin Patel. Titu got out, and the group of friends ran off in different directions. The 16 year old was chased by Patel, who caught him and stabbed him several times. Mr Miah caught up with them and assaulted the victim while he lay on the ground.

Emdadul Islam had been in a nearby barber’s shop. He fetched a baseball bat from the boot of his car and came up behind Titu Miah – hitting him on the back of the head and hitting him again while he was on the ground. Mr Islam then drove away and then drove back to the barber’s shop, by which time police and paramedics had arrived and were helping the stabbed teenager.

The trial of the two men began at the Old Bailey on 12th April.
•Emdadul Islam, 23, of Fowler Road, E7 pleaded guilty to possession of an offensive weapon at the start of the trial. At the end of it, he was found guilty of the manslaughter of Titu Miah, 31.
•Yasin Patel, 21, of Queens Road West, E13 had been charged with Grievous Bodily Harm (GBH) with Intent and possession of an offensive weapon – in relation to the stabbing which took place during the same incident. He had originally denied the charge, but he pleaded guilty on the first day of the trial.
Islam and Patel will return to the Court for sentencing on 2nd and 3rd May respectively.

DS Perry Benton, who led the investigation for the Homicide and Major Crime Command, said, “It appears that Islam was not involved in the initial fight which Titu was a part of, but he took it upon himself to casually arm himself with a baseball bat and carry out an alarming, sudden attack on Titu which resulted in a critical head injury from which he could not recover.

“Patel was identified as the person who stabbed the 16-year-old victim who fortunately did not suffer serious, lasting injury. The motive for this attack is unclear, although we believe it may have been due to a disagreement between Patel and a relative of the victim.

“This was a despicable show of violence in broad daylight on a residential street which resulted in a man dead and a young victim stabbed, and two people now facing long jail terms for their part in this incident.”

•Read more about this story:
Yet another murder in Newham