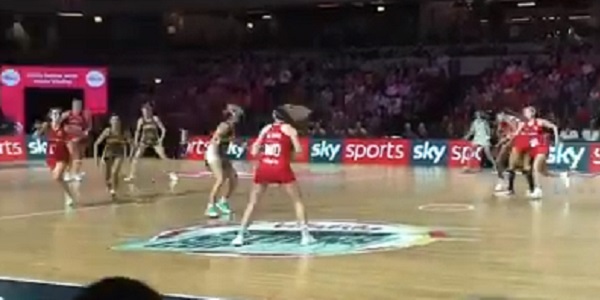 THE ENGLAND ROSES have emerged from the Netball Nations tournament in third place, after a week of thrilling sport at The Copper Box stadium in East London. The result is somewhat disappointing, though: there are only four nations in the competition.

In the early rounds, England had lost their match against the eventual winners – New Zealand’s Silver Ferns – but had beaten South Africa’s Proteas team 58-54. The early victory boosted the team as they took on South Africa for a second time, in the third place play off.

The play off began with three new faces – Razia Quashie, Amy Carter and George Fisher – in the England team. The change, instituted by Head Coach Jess Thirlby, paid off, with England leading by 36-29 at half time. They held on during the second half, but South Africa began to fight back – even going into the lead just four minutes before the end. A last second effort from Stacey Francis just clinched it for England with a score of 65 to 63.

Two years ago, England won the tournament, which was played that year on Australia’s Gold Coast and going home with the bronze does not sit easily with the England team. “We don’t want to become a team that is happy with a 50-50 success rate as we want to win every time we step on court,” said England defender Stacey Francis.

The gold medal was taken by New Zealand, who are current World Champions and who beat Jamaica 67 to 56 in the final. The next match for the England team will take place in September, when England will join teams from South Africa, Australia and New Zealand in the Quad Series.