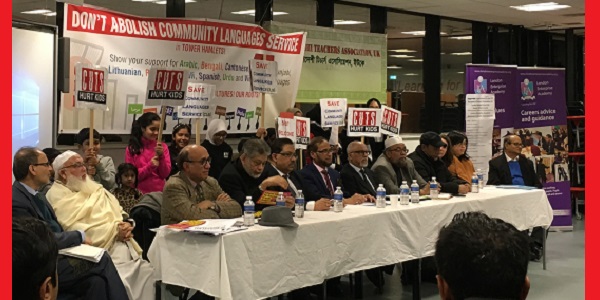 IS NOW THE TIME to stop specialist modern language teaching in Tower Hamlets? The teachers and service users who came to a public meeting at the London Enterprise Academy on Saturday (25th January) said no: but one man is saying “yes” – the Tower Hamlets Executive Mayor John Biggs.

There are at least 90 languages spoken by children who go to school in Tower Hamlets – but few teenagers are able to take GCSE (let alone “A”-levels!) in community languages such as Cantonese, Mandarin or Lithuanian on the basis of the teaching which can be provided in school alone. However, universities and employers are desperate to find recruits who have language qualifications. Tower Hamlets Council has therefore worked to bring teenagers together, for teaching and to gain the necessary qualifications.

The teaching is offered by the Tower Hamlets Community Language Service (CLS). This is no fly-by-night dodgy organisation set up for the short term: the CLS has been going since 1979 – seeing hundreds of pupils deepen their knowledge of their mother tongue and formalise their skills in recognised qualifications.

Sadly, 2020 marks the year when Executive Mayor John Biggs has decided all this must stop. His approach seems to be that the Council funds schools – so any child who wants a qualification can get it in school, and the Council can abolish this separate budget heading of skilled language teaching.

A list of over 40 organisations which support the BTA campaign was displayed at the public meeting.

If there is one skill the Executive Mayor has, it is uniting people – against his decisions. Some 40 organisations are working with the Bangladeshi Teachers Association to explain to the public why this work is important and why Executive Mayor John Biggs should not close it down.

A packed meeting at the London Enterprise Academy heard all the reasons why. Md Abu Hussain, Chair of the Bangladeshi Teachers Association (BTA) said that the Association is very concerned about this threatened cut. “Surely,” he said, “the Council can find, in its huge budget, the relatively small sum necessary to keep this valuable service going?”

Representatives from a number of organisations spoke about the coming Council meeting on 19th February and what could be done to stop the Council closing the CLS down. Some pointed out that the Council would be taking a final, formal decision at that meeting – and pressure should be brought on the Council beforehand, while it was still drafting the budget.

The Cabinet had decided at a meeting on 18th December to close the service, after nearly a year of reviewing it. The BTA had spoken to officers and Councillors during the review, but it did not seem to be a review so much as a cover up for a fait accompli. £250k will be spent in 2020 as a one off, but then the organisations will have to decide how they will fund their future. At the moment, 1,600 children at the moment will be left high and dry.

For the BTA, the CLS was not just important because of language learning, but also because the Bengali language plays such a large part in the history of young Bangladesh. Tower Hamlets residents of Bangladeshi heritage played a large part in electing the Mayor and Council, and now many of these voters are wondering whether their support is being taken for granted.

•Campaigners are calling on members of the public to sign a petition in support of the CLS:
Sign the petition