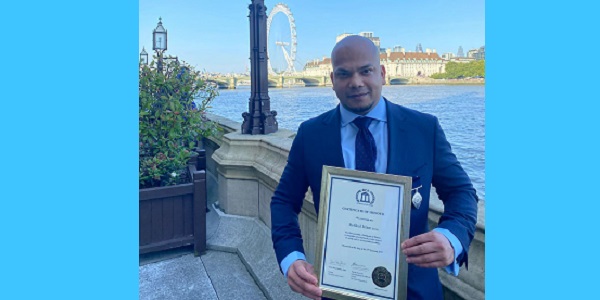 ROFIKUL ISLAM BCAc is among the 27 extraordinary people selected to receive the distinguished British Citizen Award – a nationally recognised award for individuals in the UK who have demonstrated extraordinary leadership and social activism within in their communities and beyond.

Dubbed the “People’s Honours”, each medal bears the words “For the Good of the Country” and is presented to only a small number of exceptional individuals twice annually. The British Citizen Award is widely viewed as the nation’s way of recognising extraordinary but everyday people for exceptional services to communities and is now representative of today’s multicultural Britain.

Rofikul has been playing a very active role in his local community across the East London area, supporting projects that have had a massive positive impact. His involvement ranges from running a soup kitchen for the homeless to arranging the logistics for providing more than 35,000 food packs to families in need during the peak of COVID-19 pandemic.

Rofikul assisted in the setting up of the BookBike Project last year, which saw the project cycling around the capital to deliver books to people who might not have had access otherwise. More recently he has been working with local community organisations to help support refugees from Afghanistan.

After the ceremony at the House of Lords, Rofikul commented, “This is a huge honour for me and I would like to thank my family, colleagues and mentors for their guidance and faith in me. A huge thank you goes to the Rt Hon. The Lord Dholakia and the BCA selection committee for granting me such an auspicious award.”

2021-09-20
admin1
Previous: Police appeal for info after fatal Newham stabbing
Next: Chase the Moon on Wednesday