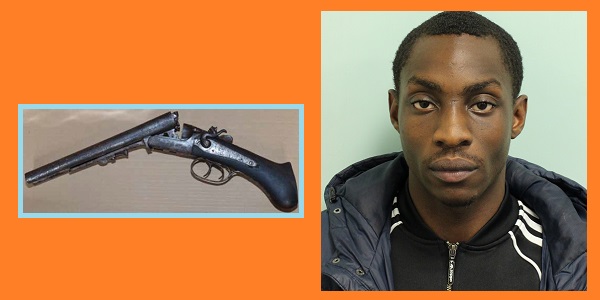 A MAN FROM the Clapton area of Hackney has been sent to prison for life after shooting at police officers – who had come to his house to arrest him in connection with an incident of armed car-jacking. No officer was hit by the shots.

The guilty man is Derrick Fatunbi, 22, of Mandeville Street, E5. He was sentenced at Isleworth Crown Court on Friday, 28th February – after being found guilty of attempted murder at an earlier trial at the same Court. The Judge called Fatunbi a “dangerous offender” and recommended that he serve at least twelve years in jail.

At the earlier trial, on 28th January, Fatunbi was also found guilty of a charge of robbery and a charge of possession of a firearm with intent to cause fear, arising out of the car-jacking incident. He had pleaded guilty to a charge of robbery at a Dalston supermarket back on 8th April 2019 before the trial began.

Detective Constable Chris Williams, from the Met’s Central Specialist Crime Command, said, “My colleagues in Specialist Crime, along with firearms officers and the rest of the Met are committed to taking people like Fatunbi and the weapons he was armed with off the streets. The outcome of this incident could have been even more serious. Having committed a violent robbery, Fatunbi threatened the police officers who were trying to arrest him and it is hugely fortunate that there was no loss of life that night.

“My thanks go to the prosecution counsel, our colleagues in the Crown Prosecution Service (CPS) for their diligence and professionalism throughout this case, as well as the victims and witnesses who supported this investigation by providing statements and giving evidence at court.”

Chief Superintendent Andy Walker from the Met’s Specialist Firearms Command, added, “Our armed officers put themselves in harm’s way on a daily basis to keep people safe from dangerous criminals. On this occasion, they responded with remarkable tenacity and immense bravery to track down a particularly violent criminal and stop him from harming anyone else, and I am pleased that the trial judge commended their bravery. I have no doubt that London is safer now that Fatunbi has been brought to justice.”