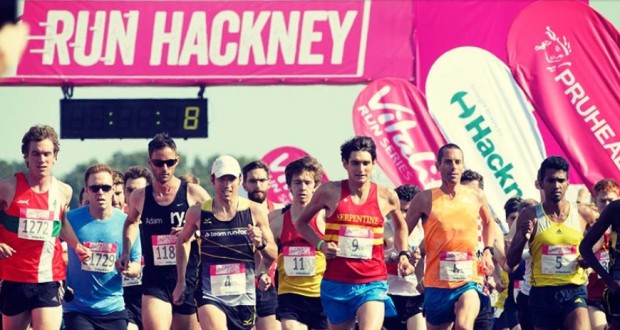 Hackney’s warming up for Race Weekend!

The people are taking to the streets in Hackney this weekend – not in a belated exercise in participative democracy, but in a pair of running competitions under the name Vitality Run Hackney which will be fun for participants and audience alike.

The weekend kicks off (no pun intended) with a free 5k run around Hackney Marshes for 2,000 runners on Saturday, 9th May. This event is designed to encourage local runners to get into running: many of the entrants are new to the activity, and event organisers hope they will be so smitten that they will come back for the Half Marathon in future years. All runners who finish will receive a medal – will it be the first of many for them?

The weekend fun runs out (OK, pun intended) with the Vitality Run Hackney Half Marathon on the morning of Sunday, 10th May. This will see some 13,000 runners pound the route through Hackney, with many thousands more expected to line the streets to marvel at their endeavours and cheer them on their way (and enjoy some of the street entertainment laid on by event organisers). The route has been improved since last year’s race debut and ends in Queen Elizabeth Olympic Park (another small legacy bonus for local taxpayers who funded the Olympics). Runners who reach the finish line will receive a T-shirt.

The Half Marathon starts at 9am at Hackney Marshes. The route goes through Hackney Downs, Broadway Market and Victoria Park Road. Elite runners are expected to finish just after 10am, with the majority of runners completing the course between 10.45am and 11.45am.

After the Half Marathon runners cross the start line, around 1,000 local primary school children will complete the Schools’ Challenge. Boys and girls from local schools have been running a mile a week ahead of the event to clock up 12 miles before race day. On Sunday, they will run their final 1.1 miles to complete the equivalent of a Half Marathon distance.

The Race Village on Hackney Marshes will host live music, refreshments and family entertainment for runners and spectators alike. The necessary road closures in the borough will start from as early as 7am, with roads being re-opened as soon as possible and by 2pm at the latest. The closures will also affect some bus routes. Full details can be found at www.runhackney.com.

“I would urge the local community to come out and support all the runners once more. It makes a tremendous difference to people running seeing friendly faces and hearing encouragement. There will be plenty of local people running but we are also expecting thousands from further afield, including elite runners, to cheer,” said Jamie Warren, Head of Commercial and Marketing, GO2. “I appreciate there will be some disruption to accommodate the event and I would like to thank local residents, businesses and organisations for their co-operation and understanding.”