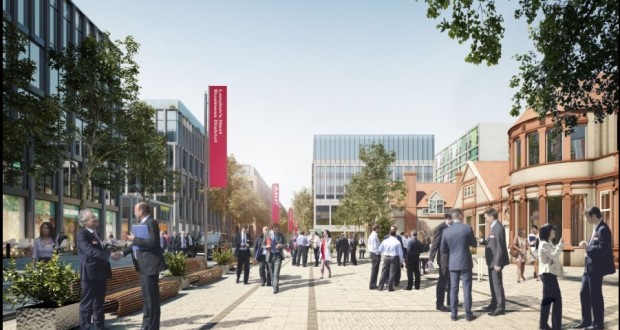 An artist's impression of the new (apparently mono-cultural) Royal Docks.

Head for the hills!

In the 1980s, the then Tory Government set up the London Docklands Development Corporation, which made deals (usually discounts on their taxes) with various companies to move to the Isle of Dogs. They told us that wealth would trickle down and they were re-generating the area. Now Boris Johnson and Newham Council have joined forces in what may be a move which forces us all out of the East End. It seems that the current Tory London Mayor has learned nothing from the Docklands Development failure.

A year ago, Boris Johnson announced that he had hatched a deal with Chinese property developer Advanced Business Holdings which will see an “Asian Business Port” (ABP) set up in East London. Few details of the deal have been revealed, but there are reports that the ABP is to consist of nearly 5 million sq ft of offices within the 35 acre site, which will also accommodate housing and shops. There have been no reports of social infrastructure – such as doctors, dentists, schools and hospitals – being provided to support the residential element of the development or its daytime working population. Travel is another major consideration: although the developers have seized on Crossrail as the key medium which will link them to the capital’s transport network.

Boris Johnson’s Chinese partners seem very keen on the deal. They say they’ve lined up 60 companies to rent space in the new Business Port already. It’s too early yet to put dots together to make a line, so of course none of them have signed on it yet – but that also means that the success of the development rests on the Chinese economy getting over its current wobbles.

The architect who will design the first phase of the new development is Sir Terry Farrell. He has been moved to say, “this development will re-instate the Royal Docks as a commercial and trading centre for the 21st century.” This is quite worrying. The Royal Docks used to be a major, major employer as it handled import and export of raw materials and finished goods. The plan seems to be to turn it into a set of offices for the financial services industry.  It’s hardly like with like.

The Chinese developers are working with UK developers Stanhope. They see the new development as, basically, an extension of London’s financial services industry to the East: from the City, to Canary Wharf, to Royal Docks.

The development relied on obtaining planning permission from Newham Council. Their Strategic Development has now backed the project as a whole in principal as well as detailed plans for the first phase. Work can now go ahead with the first of the development’s three phases due for completion in roughly three years time.

What are they thinking? These days, it’s hard for a planning committee to turn down any big development, as many decisions are now in Boris’s hands and developers have always been keen to appeal against planning refusals. Tower Hamlets Council has gone some way to protect local residents by developing masterplans and the like, which developers may then have to take account of when they try to grab a slice of our land resources to exploit. Councils should also be looking at their Local Development Frameworks, to make sure they don’t entice developer-exploiters in where they are not wanted.

What is not clear is how this development is going to regenerate Newham.  There are reports that the ABP could generate 20,000 jobs, but it is not clear if these are construction jobs or work in the development once it is complete. What jobs would Eastenders get in an Asian Business Port? Are our schools churning out lots of hot, qualified, articulate and capable young businesspeople who can’t find work because there aren’t enough jobs in financial services industry? None of this is yet known. We don’t even know the terms of Boris’s deal with the Chinese developers and whether they will hold to the basics such as paying their fair share of taxes.

The Isle of Dogs used to be a major local employer and the nature of its work, as a centre for import and export of gods, well reflected the cosmopolitan borough. When the docks closed, the area could have been developed in a way which would have helped the local community which had lost its employer. The Isle of Dogs was turned into a major financial centre, which has been a great negative for the local community. Yes, there are a few jobs for the locals in the shops and watering holes of Canary Wharf, but nothing major in the businesses which have moved in. Worse, the business development has seen a vast development of residential property which is either for owner occupation or for purchase by the corporations which have moved to E14. This has taken up the space which could have been developed for housing need and it’s forced up the cost of land to the point where local have just been priced out of the housing market locally. It’s not just that the wealthy are moving in and taking up the space social housing could have taken, it’s also that (ironically, Chinese) corporations are investing in local property. They buy up housing they have no intention of living in or even renting out, just because the market will drive up house prices more than interest rates, giving them a higher return on their money than any bank could do. It’s a phenomenon which has started on the Isle of Dogs, but spread to much of Tower Hamlets.

Although there is a global recession, there are countries and individuals with spare capital, looking for a place to put their money in to in order to extract more money out of. If Tower Hamlets is full, and it almost is – then the developers need to look further East.

It looks as if Newham may be about to suffer the same problems which have beset Tower Hamlets. For the rich to rip the heart out of one London Borough is bad enough. To see history repeat itself is tragic.