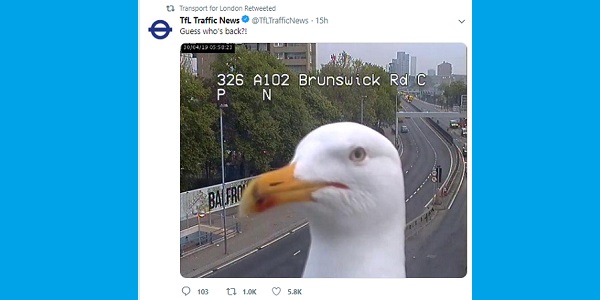 THERE’S MANY AN East End resident that’s found fame in front of the cameras – but the latest East Ender making a name for themselves has done so in a rather unusual way.

A seagull seems to have stopped off on its way to Billingsgate to check out the Transport for London Traffic Cam just above the southbound A102, just above the entrance to the Blackwall Tunnel.

It’s been a real hit with TfL twitter followers – who have been speculating about what it’s trying to tell us. Has it stopped to ask for directions – or is it just trying to update travellers on road conditions near the coast?

Our guess is that this is a seagull with a social conscience. It’s spotted a camera right in front of Balfron Tower and has hopped on to bemoan how Poplar Harca has removed all social tenants from this landmark block and is refurbishing it – to sell it off to private tenants and private landlords. Goodness knows what kind of direct action the seagull intends to move on to…