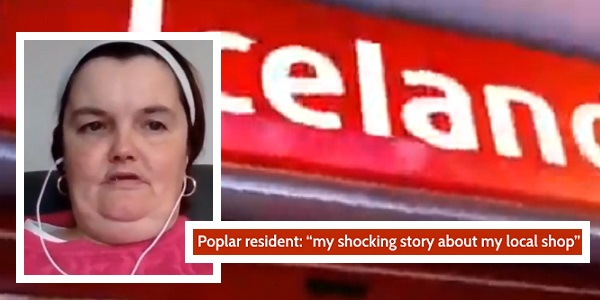 A LOCAL ICELAND supermarket has come under a shower of complaints as Poplar residents have realised they have similar complaints about the store – which does not appear to be operating Covid safety measures.

The complaints were first aired by Poplar resident Dawn Gilfoyle, who used to be a frequent visitor to the Vesey Path store. She told her story on this week’s The Tuesday Show, a local news magazine programme streamed live on the VodTalk Facebook page.

As she neared the till, Dawn was horrified to see that a customer in the queue in front of her was asked by the cashier to move closer to the till. Dawn was a Tower Hamlets Council Covid Champion, and she felt compelled to speak out and ask the cashier to let customers keep their distance. She received a very rude response.

The studio guest on the broadcast – Maium Miah Talukdar, who chairs the Island Network, an umbrella group of community organisations in E14 – was horrified to hear Dawn’s report. “The behaviour of staff in the Iceland store is completely unacceptable,” he said. “We expect local supermarkets to be Covid aware, to protect shoppers and to allow them to take safety measures themselves. Is the NHS going to have to pick up the casualties from this supermarket’s casual attitude towards public safety?”

During the broadcast, a listener called in to say that he had also experienced safety lapses in the shop and he intended to make a complaint.  A second listener posted further confirmation on social media that the shop is regularly far too full.

“I have written to Iceland’s head office,” said Maium Miah Talukdar, “asking them to investigate what is going on at this store and to make the necessary improvements.”

Dawn Gilfoyle has reported the store to the police for investigation for potential breach of Covid rules.  Sadly, this is not the end of the story.  Two days after her appearance on The Tuesday Show, Dawn’s mother went to the same store. A customer who was not wearing a face covering coughed all over her, and she was then verbally attacked by another customer.

The Tuesday Show contacted Iceland’s Head Office for their comments but to date they have not replied.

●What is your experience of shopping in Iceland?
•Use the comment facility below to tell us if you have had a bad experience in the Iceland store in Chrisp Street market – or a good one!
•To make a complaint direct to Iceland, fill out the form near the bottom of their head office contact page:
Complain