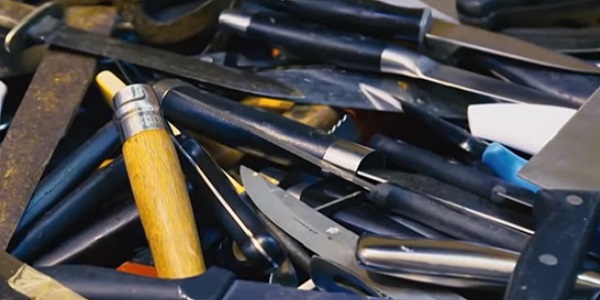 OFFICIAL FIGURES for last year show that knife crime is on the rise. The Office of National Statistics has confirmed that police forces in the UK recorded 40,829 offences involving knives or other sharp instruments in 2018.

That’s a rise of 6% on the previous year and the highest number of such incidents since knife crime began to be recorded separately in 2011 – one year into the Conservative led Coalition Government which introduced austerity.

Knife crime increased across the country, with the number of incidents last year up in 31 of the 43 police forces. However, the rate of increase varied – going up by over 50% in the transport areas covered by the British Transport Police and by only 1% in London (which saw 14,660 cases recorded).

The knife crime included 252 killings, with 18,950 cases of knives being used in assaults and 17,402 instances of a knife being used in the course of a robbery. The only glimmer of hope in the statistics is that the rate of increase appears to have slowed over the year.

The number of cases of murder and manslaughter rose by 12%, once the figures relating to terrorist attacks are removed. A total of 732 people lost their live – that’s the highest number in over a decade.

Nick Hurd, Minister for Policing, said that the Government was trying a new approach of reducing violent crime by trying to prevent young people becoming involved in crime. He said that the Government sees crime reduction as a public health activity, and this approach seemed to be beginning to work. However, Shadow Home Secretary Diane Abbott said that the new figures were “deeply troubling” and attributing the rise in crime, in part, to government cuts to police forces.

•The announcement of the increase in knife crime comes after the Children’s Commissioner for England, Anne Longfield called for the authorities to target more support at helping girls who have become embroiled in gangs. Speaking on the Victoria Derbyshire programme on BBC2, Ms Longfield said that girls were often used by male gang members – often being forced to transport drugs or weapons as it was thought that they were less likely to be stopped by the police than young men were. The Local Government Association responded by saying that they would like to do more preventative work, but government cuts left them no money to do anything more than deal with young people and children who were at immediate risk.

•Read more about it:
East London teens jailed for knife and acid attacks
Man gets jail for Isle of Dogs knife attack