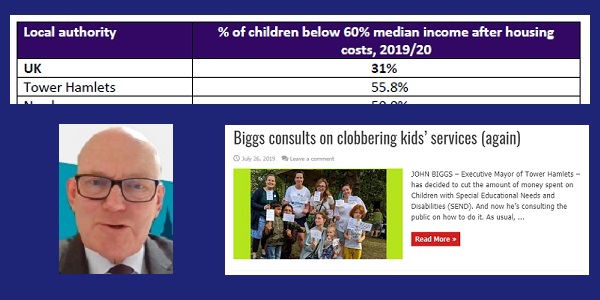 Executive Mayor John Biggs blames the Government for child poverty in Tower Hamlets - but have his cuts in services played a part?

Labour praises its own failings on child poverty

OVER THE last five years, child poverty in Tower Hamlets has increased by just over 5,000 – that’s around an extra 20 children a week, nearly three children a day, living in families that just can’t make ends meet.

During the five years which saw that increase, Executive Mayor John Biggs, elected on a Labour Party ticket, has run the Council. And now the Tower Hamlets Labour Party has issued a press release praising John Biggs for his work to fight poverty – the work that has been such a failure in respect of the children of Tower Hamlets.

The poverty figures come from research conducted by the Centre for Research in Social Policy at Loughborough University – on behalf of the End Child Poverty Coalition. Their findings include:
●500,000 more children in the UK are living in poverty than were doing so in 2020;
●the number of children living below the poverty line in Tower Hamlets has shot up by over 5,000 – from 30,728 in 2014/15 to 35,807 in 2019/20;
●Tower Hamlets tops the table of the 20 local authorities with the highest child poverty rates in 2019/20, with 55.8% of children living in poverty (the national average is 31%) – with only Newham (50.0%) having a child poverty rate of 50% or above.

Much of the cause of child poverty can, in the first instance, be attributed to government policy. However, Executive Mayor John Biggs offered a rather pedestrian, routine response in the Labour Party press release – and seemed in no hurry to see the potential for the Council to make combatting poverty a big priority. “As a council we work hard to fill in the gaps left by the Conservatives, offering  lifelines to the poorest people across Tower Hamlets such as our Tackling Poverty Fund and offering Free School Meals to all primary children in the borough,” he said. “However, the reality is that local councils can only do so much, and we need the Government to do much more.”

Maium Miah Talukdar, a community activist on the Isle of Dogs, has been working flat out on practical measures, such as delivering food supplies, since the pandemic began.  He criticised Labour’s John Biggs for not doing more to mitigate the effects of that poverty. “Child poverty figures in Tower Hamlets are shocking,” he said. “The Labour Administration of John Biggs has presided over a heart-breaking increase in child poverty in Tower Hamlets – which has been exacerbated by Labour’s choice of cuts to key local support services for vulnerable children and families.”

The former councillor alleged that John Biggs had given up the approach adopted by Lutfur Rahman, which always sought to protect the most vulnerable members of the community. “Mayor Lutfur Rahman’s progressive and independent Administration worked extremely hard to fill in the gaps left by the Tory-Lib Dem Coalition, offering extra support and lifelines to the poorest people across our borough,” explained Maium Miah Talukdar, “Councils can do a great deal for residents, despite the unprecedented challenges of our times, if they have the right leadership.”

Maium Miah Talukdar welcomed the “No Child Left Behind” campaign launched by the National Education Union (NEU) to ensure children do not go hungry and have access to online learning resources. He urged Executive Mayor John Biggs to do the same. The local Labour Party has reported that he has done so. 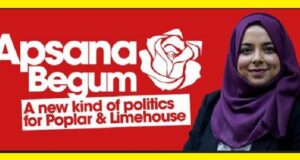 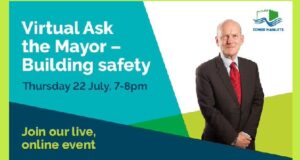 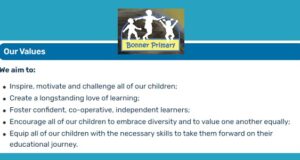