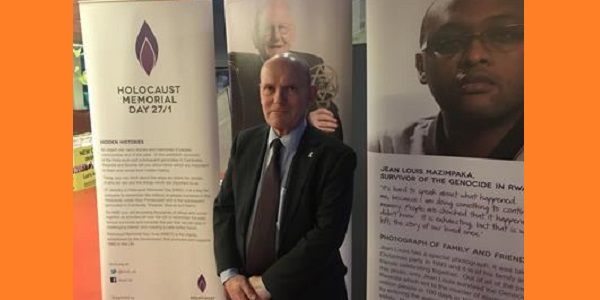 TOWER HAMLETS Council joined millions of people across the UK last week in remembering the Holocaust – when six million people were killed by the Nazis. Most of the victims died as the Nazis attempted to annihilate Jewish people.

Other groups were targeted by the Nazis for killing and for harassment and inhuman treatment – including gay people, old people, Roma people and gypsies, and people with disabilities. Since the Nazis were defeated, other governments have undertaken ethnic cleansing and genocides, targeting groups because of their race or ethnicity – in Cambodia, Rwanda, Bosnia and Darfur.

Holocaust Memorial Day marks the Nazi Holocaust against Jewish people, but it’s also a time to remember other genocides and abuses – and a time to commit ourselves to organising our global society so these mass murders don’t happen again.

There were several ways in which Tower Hamlets Council marked the Holocaust – with leading Labour politicians sharing the duties of representing the ruling party.

On Thursday last week, Executive Mayor John Biggs went to visit the Untold Stories exhibition which has been touring the borough’s Idea Stores during January. The exhibition, which was loaned to the Council by the Holocaust Trust, tells the story of five survivors of the Holocaust and of the genocides in Rwanda, Bosnia and Cambodia.

On Friday, the Speaker of the Council, Cllr Sabina Akhtar, spoke to a gathering of council staff, who had observed a two minute silence in memory of the victims of Holocaust. Cllr Peter Golds, Leader of the Tory Group, joined the event and recited the “prayer for the dead” in Hebrew.

On Sunday, Deputy Mayor Cllr Sirajul Islam joined a multi faith service of remembrance at the East London Central Synagogue, where he spoke about the borough’s tradition of welcoming communities to Tower Hamlets over past years. He urged everyone present to maintain a spirit of co-operation in the borough.

Executive Mayor John Biggs said, “Remembering the millions who lost their lives during the Holocaust and other genocides is vitally important but we must also make sure history is not allowed to repeat itself. Educating the younger generation about the horrors that so many experienced will be an important part of that and I’m pleased to see that school children were a priority in our programme of commemorative and educational events last week. I visited the Untold Stories exhibition at the Chrisp Street Idea Store and was moved by the touching testimonies on display.”

•Read more about it:
Rabina and the words of Holocaust and hatred
Council remembers those who lost their lives in the Holocaust