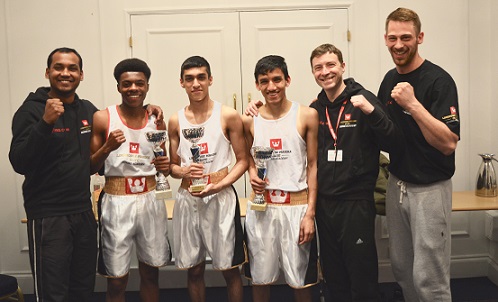 Limehouse boxing boys show their worth

Youngsters from the Limehouse Marina Elite Boxing Academy enjoyed success during an evening of boxing bouts as three promising protégés put up sterling boxing performances to serve a taste of what the future looks like. The event was the prestigious Fisher ABC annual dinner show at the Millennium Hotel, Grosvenor Square.

Arafat Salum (55.5kg) had a rematch against an opponent from Fisher ABC. Salum dominated his opponent in all three rounds to win on a unanimous decision.

His team mate Alim Hussain (47.5kg) took part in his very first bout against an opponent from Eltham ABC. Alim defied his novice status and fought like an experienced boxer, establishing his promising jab in all rounds. His consistency and control enabled Alim to win unanimously.

Sabbir Hussain was unlucky to lose on points decision. He boxed extremely well against a more experienced opponent from Eltham ABC. It was a very close fight, with many predicting the decision to go either way.

Coaches Mark Collings and Shah Rahman were both on hand to watch over the boys. Collins said, “We had three winners tonight!” Rahman added, “This experience will build the boys character for the better.”