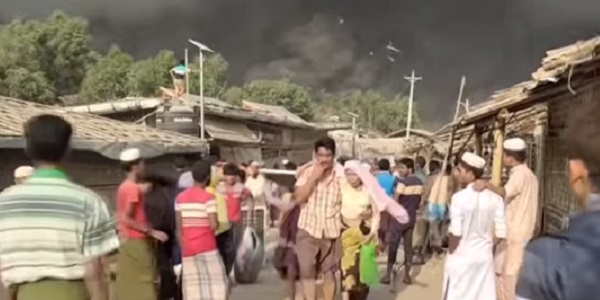 Refugees start to run away or stand and stare as a big cloud of black smoke from the fire hangs over the refugee camp.

A MASSIVE FIRE devastated the Rohingya refugee camp in Cox’s Bazar, Bangladesh, on 22nd March. The scale of the disaster is so great that the Muslim Professionals Forum (MPF) has called on the international community to step in and help.

The grim statistics are:
• that 15 people are known to have died;
•400 are missing;
•10,000 makeshift shelters have been destroyed, leaving up to 50,000 people homeless.
That’s like sweeping away the city of Salisbury: but there has been no international outcry, no offers of aid and support from other countries.

Aid and support from the international community has been inadequate since 2017, when the Rohingya people began fleeing from persecution by the army in Myanmar.  Over one million people have sought refuge in Bangladesh: international aid has been enough to keep them in makeshift shelters with very basic food handouts, but nowhere near enough to give them security or dignity. Charities have helped, supported by donations from Muslims around the world.

As Ramadan approaches, Muslims all over the world know that once again these persecuted people are entering the Holy Month in the most dire situation.

Muslim Professionals Forum Chair, Cllr Khaled Noor, said: “The Rohingya people are being kept alive – but they are paying a heavy price for fleeing torture and death in Mayanmar.

“Now everyone can see what the brutal Myanmar army is really like. They have shot hundreds of protestors since they took over the country on 1st February – including, this week, a seven year old girl. I call on the United Nations and richer countries around the world to help this persecuted Muslim population.”