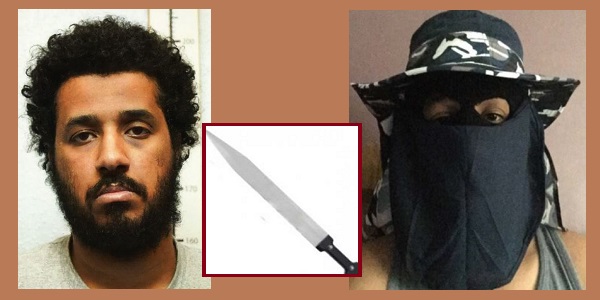 Abu: in custody (left) and wearing cover-up headgear (right) - together with the knife he bought.

A POLICE surveillance operation stopped a man from carrying out a terrorist attack. What he was planning to do and where he wanted to do it is not clear: but from the weapons he tried to obtain, innocent people were at risk.

Sahayb Aweys Munye Abu, 27, lived in East London, but his address has not been revealed. During May and June 2020, he ordered weapons, equipment and clothing from the internet – items which he wanted to use in his attack. Among his purchases were a lock knife, a ballistic vest, two balaclavas, fingerless gloves and a fishing hat which had a face and neck cover. 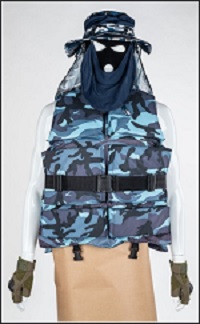 MI5 and the police launched a joint investigation which included an undercover officer befriending Abu and chatting to him online and at two meetings.  Abu told the officer he was interested in obtaining firearms.  Police also established that he had visited websites which supported Daesh and he also discussed extremist views with others online.

Abu was arrested on 9th July, after he ordered a large sword – a weapon which they believe he intended to use in his attack. He initially denied that he intended to commit a violent act and claimed that his purchases were made so that he could do a parody “drill” music video. However, the police gathered material from his electronic devices, which showed a compelling interest in suicide bombing and other terrorist acts.

Abu was put on trial at the Old Bailey on 9th February.  On 12th March he was found guilty of preparation of terrorist acts, contrary to Section 5 of the Terrorism Act 2006). He will return to the Court to be sentenced on 9th April.

Commander Smith said, “Over several months, Abu sought to obtain weapons and the equipment needed to commit a terrorist attack. He is an extremely dangerous individual, but we were able to intervene and arrest him before he was able to carry out his attack.

“This investigation took place during the Covid-19 pandemic, but our focus on keeping the public safe from terrorism has not wavered during that time. Whilst people will clearly have other things on their minds at the moment, we must also remember that the threat of terrorism in the UK is still very real and an attack remains likely. We continue to rely on the public’s help and support in our ongoing fight against terrorism.”

Commander Richard Smith, head of the Metropolitan Police Counter Terrorism Command, added, “This is a prime example of how our officers and the security services are working together to keep people safe. Every day, counter-terrorism teams are identifying and targeting individuals and groups with violent, extremist views and those with terrorist intent. They gather the intelligence and evidence we need to identify those who pose a threat, so that we can stop their activity, bring them to justice and protect the public from harm.”

●Anyone who has any information about possible terrorist activity or offences should call the Anti-Terrorist Hotline on 0800-789 321. If there is an immediate threat, always call 999.

●Read more about it:
Reward announced as mother pleas for info on son’s killers
Jail for Newham drug dealer after Hackney collision