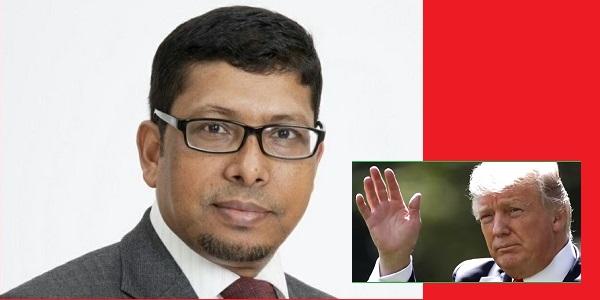 Ohid calls on Biggs to take a stand against Trump

DECLARE TOWER HAMLETS a Trump Free Zone! That’s what Cllr Ohid Ahmed is calling on John Biggs to do. He has tabled a motion for the Council meeting next week, asking the whole Council to join him in asking John Biggs to take action.

Cllr Ahmed’s call comes as the backlash against the US president grows in the US and the UK. The Mayor of Chicago has declared that city a “Trump-Free Zone” and, just across the water from Tower Hamlets, the Royal Borough of Greenwich has banned Trump from their territory.

Trump had planned to visit the UK in February to open the US Embassy – a visit which he has recently cancelled. That doesn’t mean it would be pointless for Tower Hamlets – and other London Boroughs – to ban him: it’s a most which would deal with any future visits he may plan, and also a political statement.

Trump has come out with sexist and racist statements for years, and they haven’t stopped during the first year of his presidency. Now he has added generally xemophobic and anti-Muslim comments too, as well as denying the findings of modern science when it comes to climate change. He’s also ridden a coach and horses through traditional diplomacy and tried to wreck negotiated settlements of highly tricky and sensitive issues.

Surely there can’t be anyone who lives or works in Tower Hamlets who thinks that Trump would be welcome in the borough? More, his presence would pose a danger to the public, as he provides fuel to the bigots in the community.

The Labour Party, which has a majority in the Council Chamber, doesn’t usually allow motions tabled by opposition councillors to move motions which they have tabled.

Cllr Ohid Ahmed said, “Downing Street and the White House both remain adamant that the invitation by our Prime Minister has been accepted and ‘we are still working to finalise a date.’ That’s why I have submitted a formal motion to the council urging the Mayor to support my campaign to declare Tower Hamlets a ‘Trump-Free Zone’ and ask our Prime Minister to withdraw the invitation urgently.”