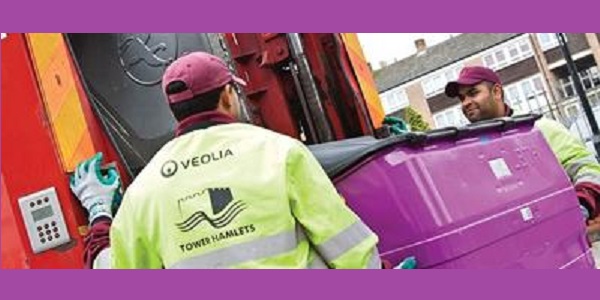 JOHN BIGGS, mayor of Tower Hamlets, wants to see more of the borough’s residents recycling their rubbish – and he has made a small concession to make it slightly easier for them to do so.

The bad news is that there are only seven places in Tower Hamlets where the sacks can be collected from. Residents collecting the bags will have to produce proof of address

Technically speaking, it is only residents who live in areas where sacks of recycling are collected who need to put their recycling into bags. The Council says that residents in flats and “with kerb side collection” (presumably that’s ground floor properties) can put items into the “large purple wheelie bins” direct, without the need to bag the items up.

It’s not clear if the Council is referring to the purple wheelie bins (which generally seem only to be given to ground floor properties) or to residents in flats who put their recycling into the large purple bins. Residents who have wheelie bins have been putting individual items in them, unbagged, for years.

However, residents in flats usually need to bag up the items they want to recycle so they can carry the items down to the large purple bins. These bins are often situated in the open and their lids are often compromised. Recycling in bags is at least protected to some extent. Loose recycling can end up in a gloopy mess as paper mixes with card into improvised papier mache which traps the general dust and dirt to make the bins very unwelcoming.

In the meantime, the Council will apparently be working with private and housing association landlords to increase recycling rates on their estates. Residents can contact their landlord to see if they will supply clear sacks for recycling.

Tower Hamlets residents can collect recycling bags from the Ideas Stores in Chrisp Street, Watney Market, Whitechapel, Bow and Canary Wharf and from Bethnal Green and Cubitt Town libraries during their opening hours and will need to provide proof of address.

John Biggs, mayor of Tower Hamlets, said, “The extended recycling service is aimed at getting even more people recycling – a key aspect of my Love Your Neighbourhood initiative. While access to bags is important to local residents, we also know that one of the biggest barriers to recycling is actually uncertainty about what can and can’t be recycled.” Presumably he will now turn his mind to eradicating that uncertainty

Cllr Rachel Blake, Cabinet Member for Strategic Development and Waste, enthused, “It’s a New Year and we hope to see everyone recycling even more than last year! The seven days a week service will make it easier for people to pick up bags at a convenient time and location for them, and we will continue to work with housing associations and managing agents.”

2018-01-14
admin1
Previous: Amputations after Redbridge flyover hit and run
Next: Ohid calls on Biggs to take a stand against Trump