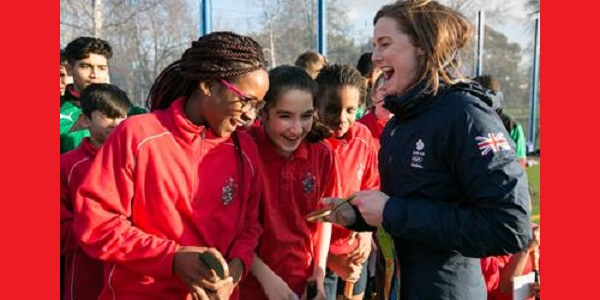 IT WAS GOOD NEWS for hockey players in Tower Hamlets last week as a new all-weather, floodlit hockey pitch was opened in Mile End Park. It was formally opened by Helen Richardson-Walsh, Olympic gold medal winner, and John Biggs, mayor of Tower Hamlets – who conducted a ceremonial ribbon-cutting ceremony.

The ribbon cutting was immediately followed by a hockey coaching session, delivered by the East London Hockey Club for some 120 local school pupils between eight and 14 years old, with Helen Richardson-Walsh joining in. The Olympian described the pitch as “a terrific facility” and said that she hoped it would inspire future generations to follow in her footsteps.

“It has been a fantastic day meeting all the school children and seeing them all enjoying playing hockey despite it being freezing cold,” she said. “After speaking to the coaches here they have said how the hockey is continuingly growing ever since London 2012 as people have been inspired by the national team to get involved. It was part of our team’s vision to inspire a generation and it is great to see it in action.”

John Biggs, Mayor of Tower Hamlets, sounded quite emotional, saying, “With so many hockey pitches being lost around the country, I are delighted that we have invested in bringing a world class hockey pitch to the community.

“It’s very important that we continue to grow sports activity in the borough and this is a great way to encourage hockey within Tower Hamlets,” he continued. “I would also like to thank East London Hockey Club for providing coaching as well as England Hockey and PlayFootball for their support today.”

Some of the funding for the new pitch came from The London Marathon Charitable Trust – and John Biggs did not reveal how much funding the Council had put into the new pitch.

The new pitch was laid over the summer, with work taking three months to complete. It replaces a previous astro pitch that was nearing the end of its useable life with a high quality 2G sand dressed astro pitch which meets current England Hockey Standards.

Cllr Abdul Mukit – whom the Council billed as “Culture Member for Culture and Youth” – said, “I’m delighted that Tower Hamlets has this new facility that can be used by local clubs, schools and community groups so that they can take part in a wide variety of sport and physical activity programmes.”

The East London Hockey Club (ELHC) has, according to its website, 450 members, so it’s good news that the pitch can be used by local clubs and schools too.

ELHC charges membership fees of up to £160 per year (£34 for youth), with additional match fees of £5 or £10 for adults and £3 for youth – which may be a disincentive for youth used to being able to play alternative sports, such as football, in the borough without having to pay. Perhaps John Biggs will discuss with them how they could remit their fees for young players.

•For more information about the East London Hockey Club, go to:
http://www.elhockey.co.uk/