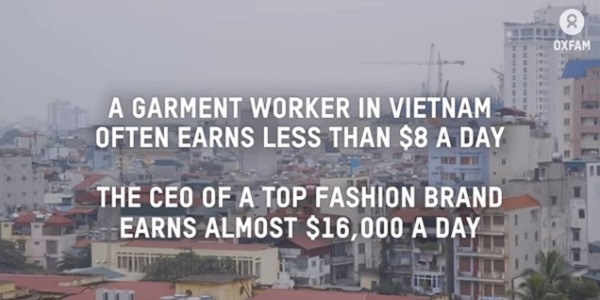 EACH YEAR for the last five years Oxfam has produced a report on the gap between the richest individuals in the world and the poorest communities – and the news is that the gap is getting bigger.

The report is published just as the World Economic Forum begins its annual meeting in Davos, Switzerland – a meeting where world political and business leaders often regret global wealth inequality but seldom, if ever, agree to take effective action against it.

This year the charity’s research suggests that the world’s 42 richest people had as much wealth as the poorest 50% of the world’s population – over £1 trillion. It also found that 82% of the money generated last year went to the richest 1% of the world’s population. Richer people see a faster increase in their wealth too: billionaires were likely to see a 13% increase in their wealth over the last year, while ordinary workers clocked up a rise of around 2%.

One particularly shocking finding is that a Chief Executive of one of the five largest fashion retailers in the world will early in just four days as much as a Bangladeshi garment worker earns in a whole lifetime.

Oxfam stands by its research – though others have said that it is difficult to be certain about how much wealth rich people have, because they are so secretive about it. Oxfam reckons there are three main reasons why the gap between rich and poor is growing: tax evasion by the rich has made them richer; while employers have reduced their outgoings by cutting the wages they pay to the poor, who have had their legal rights eroded so they can’t resist.

Oxfam Chief Executive Mark Goldring admits that the report does have a margin for error, because they can only work from the best data available at any one time – but the wealth gap and the trends are still deplorable. “However you look at it, this is an unacceptable level of inequality,” he said. “The concentration of extreme wealth at the top is not a sign of a thriving economy but a symptom of a system that is failing the millions of hard-working people on poverty wages who make our clothes and grow our food.”

•For more information about Oxfam, go to:
https://www.oxfam.org.uk/