Don't Miss
Home / Community / Pathology: for the public, not for profit say campaigners 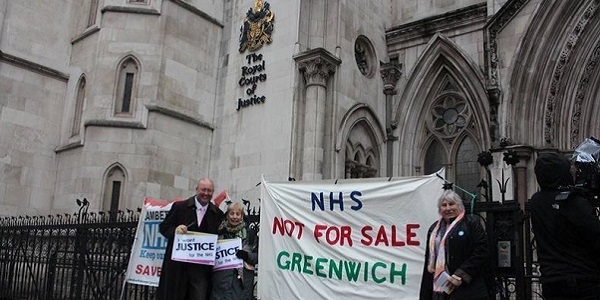 PHOTO: Greenwich Save Our NHS

Pathology: for the public, not for profit say campaigners

NHS USERS and trade union members are warning that the decision by South East London GPs to privatise medical testing may reduce standards. It will also shovel taxpayers’ money into the back pockets of a private sector company – at a time when the NHS is underfunded.

GPs use a range of medical tests to help diagnose their patients and monitor their conditions. Now South East London GPs have decided that these tests will be carried out by SYNLAB Ltd – a private company based in Munich, Germany, which operates across Europe and also in Latin America.

GPs are funded by taxpayers’ money, and campaigners argue that medical tests should be done by public sector labs, which are not required to make a commercial profit. Part of the public money GPs use to pay Synlab for carrying out tests will cover Synlab’s costs – but part of it will go to its shareholders. Campaigners argue that taxpayers money should not be handed over to shareholders of a private company.

Campaigners are also calling for various NHS bodies to research and document Synlab’s competence to do the tests. They say that this vital check was not properly carried out before Synlab was selected. They have also expressed concern that there was inadequate consultation with the public.

Campaigners also believe that no account has been taken of what will happen to the trained and committed NHS staff who may lose their jobs if the testing work is no longer carried out by the NHS. They say staff were not consulted before the transfer either. They have launched an online petition and are asking the public to sign it to show they oppose the privatisation of medical testing in South East London and the way in which the decision was made.

●Read more about it:
Is new Whipps Cross Hospital fit to face the future?
Have public services survived Covid?