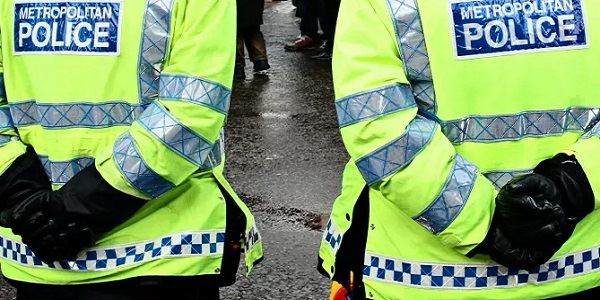 A POLICE OFFICER is in hospital in a serious but stable condition after being subjected to a violent attack by a man with a machete in Leyton.

The incident occurred just after midnight this morning, Thursday, 8th August. Uniformed police officers in a marked police car signalled to a van to stop in Coopers Lane, at the junction with Leyton High Road, E10. The van did not stop – and drove away. Police followed and a car with two police officers was able to stop the vehicle a short while later. By then they had established that the vehicle was not insured.

A uniformed police constable approached the van and tried to speak to the driver – who then attacked the officer with a machete. The officer was able to use his Taser to subdue the attacker and protect himself from further harm. The other police officer then arrested the attacker, who is aged 56. He was taken to an East London police station, where he remains in custody. He was not injured in the incident.

The London Ambulance Service took the injured officer to hospital, where he has received treatment for stabbing injuries to his head and body. His injuries are not thought to be life-threatening and he is expected to make a full recovery in due course. His family are aware of the incident. The injured officer has been in the Metropolitan Police for ten years.

STORY UPDATE – 9th August 2019
A man has been charged with attempted murder and possession of an offensive weapons arising out of this attack. He is Muhammed Rodwan, 56, of Villiers Close LU4. He appeared in Thames Magistrates’ Court today, Friday, 9th August and was remanded to appear at the Old Bailey on 6th September.
The police officer who was attacked has been named as PC Stuart Outten, 28. He remains in hospital in a serious but stable condition.

Detective Chief Superintendent Richard Tucker, is in charge of the North East Command Unit, where the officer worked. He said, “This was a frenzied and brutal attack on a uniformed officer carrying out his duties. What began as a routine vehicle stop transformed very quickly and unexpectedly into an unprovoked attack with a weapon.

“Thankfully, the officer was carrying a Taser and managed to use it. This stopped the suspect from inflicting any further injury and allowed the other officer to detain him. I honestly believe that using that Taser may have saved his life. I would like to commend his bravery, resilience and determination. Despite being repeatedly stabbed, his first thought was to protect his colleague and members of the public. I would also like to take the opportunity to commend the members of the public who did not just stand there and watch but also stepped in to help.

“Our thoughts are with the officer and his family and we wish him a full recovery. Officers come to work every day to protect the public from harm, for an officer to be met with such violence in such a frenzied way is despicable. This case highlights the very real risks with which police officers are confronted with on a daily basis and the courage and professionalism officers demonstrate when doing their job.

“There is body-worn footage of this incident and we are aware there were a number of people who witnessed the attack and may have taken footage. If you have not already come forward we urge you to do so, to assist us with our enquires.”

•Anyone who witnessed the incident or has any other information about it is asked to contact the police via 101 and quote CAD/8Aug. Alternatively you can contact Crimestoppers on 0800-555 111 and give information anonymously.

•Read more about it:
Man sentenced after horror knife attacks in Bow
Man charged with sexual assaults and robbery

2019-08-08
admin1
Previous: Biggs deep in controversy over political use of parks
Next: New Orient players meet the community