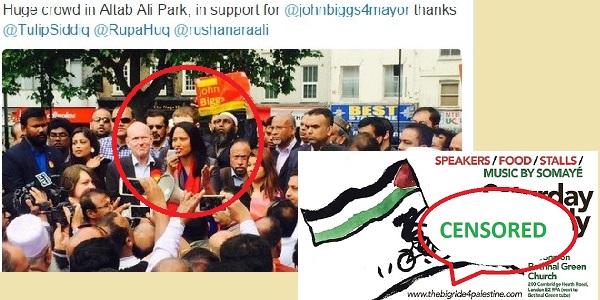 Biggs deep in controversy over political use of parks

IS JOHN BIGGS guilty of double standards? This is the question local activists are asking after Tower Hamlets Council refused to allow The Big Ride for Palestine to end a charity bike ride in a public park as it may be politically “controversial”.

However, Tower Hamlets Executive Mayor John Biggs himself held a party political meeting in Altab Ali Park in June 2015, while he was campaigning to be elected Mayor.

The Big Ride for Palestine is an annual event which raises money for children suffering the effects of living under military occupation in Gaza. Organisers asked Tower Hamlets Council if they could end the 2019 event in a park in the borough – at an event with stalls and music and speakers such as comedian Mark Thomas.

The Council refused permission, telling the applicants that doing a risk assessment for the event would be too difficult. The Palestine Solidarity Campaign (PSC) then submitted a Freedom of Information Request – and the Council had to release a set of emails between officers which tell a different story. The emails show that officers decided to turn the event down because they were worried that it might conflict with the Council’s policy on observing the definition of anti-semitism promoted by the International Holocaust Remembrance Alliance (IHRA). The PSC has written to the Executive Mayor, stating that it believes this decision to be unlawful, and his reply is awaited.

Back in June 2015, as candidates campaigned in a by-election for the post of Executive Mayor of Tower Hamlets, it seems to have been easier to hold a political event in a Tower Hamlets park.

John Biggs, then one of the candidates, held a campaign rally in Altab Ali Park. It is not clear whether the park was booked by John Biggs or his agent – or by anyone at all. It is not clear what the policy was which governed use of Council parks for public meetings at the time – especially the policy in respect of use by political parties. Nor is it clear how long Council officers deliberated over any risk assessment associated with the booking.

A short video of part of the rally was filmed and put on YouTube. A number of Labour activists can be seen in Altab Ali Park – including Labour’s 2010 mayoral candidate Helal Abbas. A number of Labour figures tweeted about the rally and many of these were retweeted by Rushanara Ali MP, including a tweet by current Cllr Tarik Khan which clearly shows John Biggs speaking at the rally.

There is already considerable anger among activists in the East End over John Biggs’s Council refusing permission for The Big Ride to use a local park. This is not likely to be diminished by the thought that the executive mayor was able to use a local park when he was a candidate.

•See the video of the rally here:
video

•Read contemporary accounts of the Labour rally in the park:
Labour: this was no walk in the park
Trouble comes in threes for Labour’s Biggs