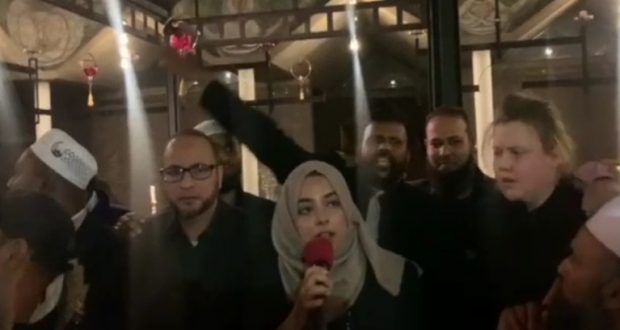 Winning candidate Apsana Begum thanks her supporters at the Poplar & Limehouse hustings meeting.

Poplar & Limehouse selection: why the outcry?

LABOUR PARTY members in Poplar & Limehouse constituency have chosen the candidate they want to stand for them at the next General Election: Apsana Begum. A new candidate had to be found as sitting MP “Dim Jim” Fitzpatrick is retiring.

Party members held a meeting on Sunday, 27th October – a “hustings” meeting. The two candidates remaining in the contest at this final stage – Cllr Amina Ali and Apsana Begum – both spoke and answered questions, and members then cast their vote. The question now is whether the losing side will accept the result.

Let’s be clear: this is not to suggest that the candidate who came second, Cllr Amina Ali, will in any way dispute the result. She has given no indication that she will do anything other than accept the result with dignity and return to her duties at the Town Hall.

However, there are those in the local Labour Party who preferred the politics of Tony Blair to those of Jeremy Corbyn. They backed Cllr Amina Ali: not necessarily because she was their preferred candidate, but because she was the only candidate left in the contest who was not Apsana Begum.

This ABA Squad (Anyone But Apsana) are used to getting their own way – as they did after Labour members across Tower Hamlets selected Lutfur Rahman as a mayoral candidate in 2010 and Labour’s National Executive Committee (NEC) was persuaded to remove him.

A number of spurious negative comments about the organisation of the selection have been made in those parts of the press that follow Labour’s selections. They are so similar that they have to have been briefed to the selected media by party members who want the media to suggest it was not a clean contest.

It is also to their credit that they managed this in a couple of weeks. It took the London Labour Party and their backers in the borough three months to organise the selection of a mayoral candidate in 2010 – and that process produced a candidate the national Party refused to endorse.

In other words: Poplar & Limehouse Labour Party managed to organise a selection in which more members voted than voted in the 2010 mayoral selection – in as many days as it took national Labour Party officers and officials to sit on a complaint and overturn the vote of local members.

It was unfortunate that the paperwork being brought by the London Region to the meeting was in a car which got stuck in a traffic tailback caused by a road accident. It was more than unfortunate that members had to stand outside the church for an hour before the paperwork But how many members had turned up to vote for Amina Ali and switched their vote to Apsana Begum because they thought they had been waiting too long?

With the General Election now upon us, we could be on the verge of seeing the first Labour MP of Bangladeshi heritage in Poplar & Limehouse – and the first socialist MP for over 20 years. Will Labour unite to make it happen?

•Read more about it:
Three women line up for Poplar & Limehouse
Corbyn under attack: must be an election due