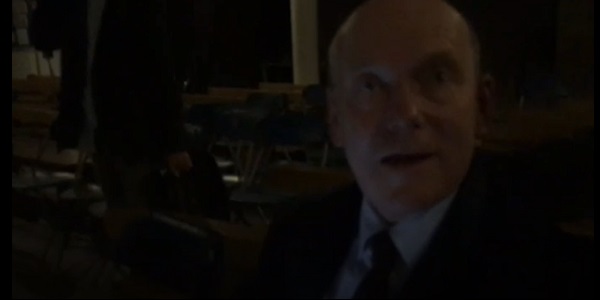 John Biggs, speaking in the gloom of the selection meeting

JOHN BIGGS, veteran politician and Executive Mayor of Tower Hamlets, has stopped short of endorsing Apsana Begum – chosen by Tower Hamlets Labour Party members to be Labour’s candidate at the next General Election.

Members had been patient with some delays in opening up the building, but the hustings held at St Paul’s Church went well. The audience of over 500 members heard opening speeches from two candidates who went on to answer five questions which were chosen at random from a larger number submitted by members present.

There was a massive cheer when the result was announced, and a number of members rushed forward, crowding round the diminutive victor as they tried to photograph and video her on their phones.

A few figures held back from the throng – including John Biggs, who sat texting as Apsana Begum paid tribute to Amina Ali for running a good contest and thanked party members for voting for her.

Biggs was probably texting a friend with the good news – and we approached him to ask if he would like to take the opportunity to give the press an endorsement of the winning candidate – or at least to congratulate her. Perhaps he was just too choked with emotion to go that far.

“It was a lively selection meeting,” he said, “let’s see how it unfolds.”

Who would have thought that you could rely on the mayor to resort to discussing origami when there’s a General Election to be won?

•Read more about it:
Biggs deep in controversy over political use of parks
Biggs consults on clobbering kids’ services (again)