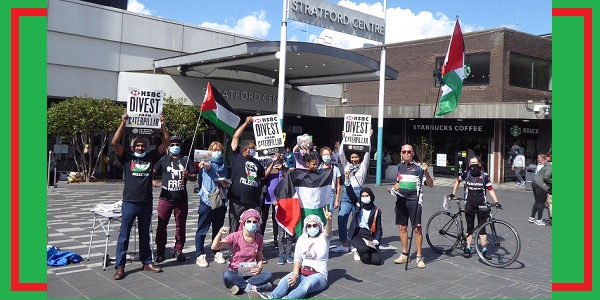 Activists from the East London PSC run an information stall on the recent "Stop Arming Israel" Day of Action.

THE Palestine Solidarity Campaign (PSC) has called an emergency Zoom rally to discuss the emergency in Gaza – and what campaigners in the UK can do to help the beleaguered residents of this small territory.

PSC explains  the emergency in Gaza like this:
“Over the last two weeks Israel has intensified its brutal oppression of Palestinians in the besieged Gaza strip.
“Israeli-imposed fuel cuts have meant that residents receive only one to three hours of electricity per day, affecting all parts of everyday life, including disrupting essential medical treatment and facilities for Covid-19 testing. Moreover, Israel has closed the Kerem Shalom crossing, the only commercial crossing from Gaza to Israel.
“As they are plunged in darkness due to the punishing electricity crisis, Israel has been bombing Gaza every night for the two weeks, damaging Gaza’s already crumbling infrastructure.
“On top of this, the first cases of community transmission of Covid-19 in Gaza have occurred, with four cases being diagnosed out of quarantine, creating worries of a deadly outbreak that the healthcare system is ill equipped to cope with, already devastated by 14 years of Israeli blockade. The blockade means the health system lacks essential medicines, and has just 65 ventilators for a population of two million.”

It’s really hard to understand how governments around the world can sit back and let one of their number treat a small neighbour in this way. PSC is calling for an end to this behaviour – which it calls “illegal collective punishment” – and for the siege of Gaza to be lifted, with the Israeli state being held to account.

•The emergency rally will hear from people in Gaza as well as politicians and trade unionists in the UK. To join the rally, register in advance here:
Rally Registration