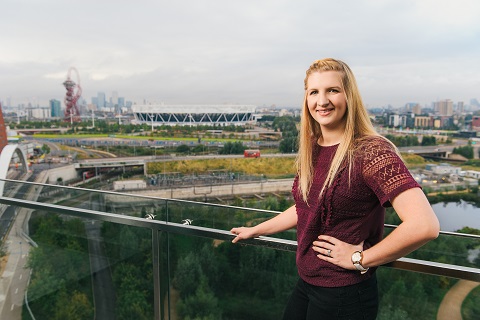 Team GB Olympian and gold medal swimming star Rebecca Adlington paid a visit to the former Athletes’ Village, now East Village, three years on from London 2012. Adlington spent a day visiting and meeting residents in the neighbourhood and unveiled one of several new plaques installed by Get Living London to celebrate where the athletes lived during the 2012 Olympic and Paralympic Games.

Adlington first got into swimming at the age of three as her parents wanted her to learn a life skill. She fell in love with the new pastime and knew then that she wanted to be a swimmer. She said: “I’ve two older sisters who were so inspirational to me but never did I think I would ever become a multiple Olympic, World, Commonwealth and European medalist.” In a glittering career Adlington competed in four Olympic finals, winning two gold and two bronze medals in Beijing and London respectively.

During her visit to E20, Adlington was shown around by East Village resident and lifestyle blogger Calum McSwiggan. She said “I’ve had a great day revisiting the Athletes’ Village – now East Village – and unveiling the first commemorative plaque with the local residents. I made so many memories here during the Olympic Games, and it’s fantastic to see that Get Living London is doing everything they can to keep the legacy of London 2012 alive in this thriving community.” 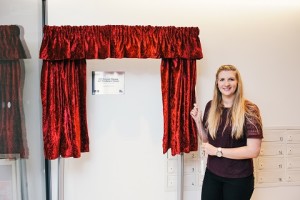 Adlington’s career highlight is easily the summer of London 2012. “It was incredible,” she said. “Great fun, podium finishes, people chanting your name. It was simply surreal.”

Adlington has been impressed with the legacy of London 2012. “London was always going to be a sustainable Olympic Games venue. Strong pledges were made and it’s been a tremendous success. We have an impressive venue and legacy and the old Olympic village has been impeccably maintained. It’s a very well thought out plan and the houses are immaculate. I want to live here.”

Adlington believes that London 2012 did inspire a generation, but the foot must remain firmly on the pedal. “Swimming is something you can do from a very young age. It’s not just a sport but a lifestyle. In London there are many pools but also rivers, water parks and lakes which offer safe swimming for families to enjoy. It’s important for children to be engaged by their parents and even better when they join in and make it a family activity.

“The great thing about London is that there are so many choices. My advice is to try different things that you enjoy and take it from there. Swimming is one option. Remember, my parents taught me a life skill. They never planned for me to become an Olympian.”

Neil Young, CEO of Get Living London, said: “We have really enjoyed welcoming Rebecca back to where she lived during the London 2012 Games and showing her around what is now called East Village. It’s been three years since East Village hosted more than 17,000 competitors and support staff. Then we were the Athletes’ Village and today, home to more than 5,000 residents across more than 80 nationalities, we have very much established a new London neighbourhood.”

Rebecca was taken on a tour of East Village, which has been transformed over the past three years by Get Living London into a buzzing community of renters living on the doorstep of Queen Elizabeth Olympic Park. She visited a number of places including Victory Park, local retailers including café and bar Tina, We Salute You and Italian bakery Signorelli, and meeting local schoolchildren at Chobham Academy, which was recently rated Outstanding in its first Ofsted inspection.

2015-09-21
admin1
Previous: The public question Tower Hamlets Council (or mayor)
Next: October at the Barbican