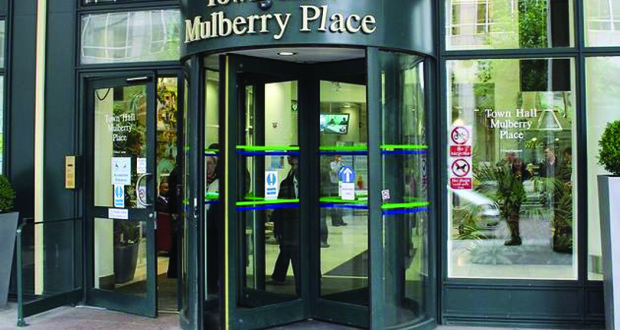 Mayor Lutfur Rahman always asked his Cabinet Members to reply to these questions, so members of the public would get a reply direct from the person dealing with the matter raised. Labour and Tory councillors were always furious about this, insisting he should answer public questions himself. Since he became mayor, John Biggs has answered some questions himself and delegated answering to Cabinet Members on other occasions – without making clear what his policy actually is, and how he chooses who will answer.

There was a range of business this month.

Tower Hamlets Fair Trade
The first question came from Marie Larvin, on behalf of Tower Hamlets Fairtrade Network. She pointed out that although Tower Hamlets was a fair-trade borough, not enough was being done to promote fair trade.
Her question was answered by Cllr David Edgar, Cabinet Member for Resources, who sympathised with the Group and asked to meet the Group to discuss the matter in detail.

Private renters
The second question came from Mr Md Sumsul Talukder who had a very long question and wanted to know what the Council was doing to help private renters. John Biggs delegated replying to the Cabinet Member for Housing – Cllr Sirajul Islam, who pointed out that the Council had no jurisdiction over much of what Mr Talukder was asking for. Mr Talukder pointed out that the Thatcher government had ended regulated tenancies and said that Cllr Rabina Khan had helped private renters when she was Cabinet Member for Housing. Cllr Islam gave out his replies at very high speed, so they were virtually impossible to follow.

The third question, from Mr Md S Rahman on recreation provisions for teenagers fell as he was not present.

Dog fouling
The fourth question was from Md Abdur-Rahman, asking how the Council was dealing with dog fouling. The Cabinet Member responsible for dog fouling (dealing with it, that is), Cllr Ayas Miah, read an answer out somewhat unclearly and fast. It seemed to run through the law on fouling on a general basis. The questioner asked if Tower Hamlets would follow the example of Barking & Dagenham and DNA test dogs, to assist in the identification of fouling products. Cllr Miah said Council policy was to clean the fouling (with expensive new equipment) rather than try to prevent it.

Question 5, from Chris Nineham, which invited the mayor to join the People’s Assembly anti-austerity demonstration in Manchester, outside Conservative Party Conference, fell as Mr Nineham was not present. Similarly, question 6, from Rachel Vincent, asking when Dame Colet and the Haileybury Centre would be finished, also fell as she was not present. Question 7, from Lilian Collins, asking for a progress report on Poplar Baths and related housing, had been withdrawn.

Main Stream Grant funding (1)
Abu Talha Chowdhury asked question 8 on the Main Stream Grants Programme. Commissioners had made awards on 29th July, and they had cut Horwood Estate Bangla School’s funding for Mother Tongue classes and a supplementary school (which it had received since the 1980s). The question was directed to the Mayor, by name, but Cllr Rachael Saunders answered this one. Her delivery was slower and therefore more audible than on many past occasions, so it was much easier to hear her totally missing the point of the question.

Cllr Saunders said that the Council’s Community Language Service funded some teachers, and that was a resource for the community. She pointed out that the Commissioners had made the MSG decisions (which was what the question had said). She and other Labour colleagues and Cllr Peter Golds had attended the decision meeting and made representations on behalf of many groups, but it had transpired that the Commissioners stuck to officers’ decisions when making their awards. She did not say how these councillors had chosen which groups they would speak up for and which they would not speak up for. She said that local people were not allowed to speak at these meetings so it is up to Councillors to speak up and they had done their best (which had not achieved any change, as the Commissioners had not varied from officers’ recommendations). She did not explain why she thought it was acceptable for Labour and Tory Councillors to influence decisions on grants, but they had opposed Mayor Lutfur Rahman doing so. She said she was amazed that Councillors who had been part of the old Administration had not attended meetings with Commissioners.

Cllr Saunders went on to say that the best way to resolve this problem (of groups not getting funding, presumably) would be to remove the Commissioners, and the current Administration is trying to do this – by devising new third sector and grants strategies. What she did not point out is that MSG grants are usually only awarded every three years, so the next round would be in 2018 – the year after the Commissioners are due to leave anyway.

Cllr Ohid Ahmed then intervened to say that independent councillors had attended some meetings on grants, but Cllr Saunders stood her ground saying that they had not been at the important ones. It was hard to follow the debate, as various councillors chipped in with references to various meetings, but there was one point where Cllrs Saunders seemed to suggest that Cllr Ohid was not sure what he was talking about and laughed a little laugh and some other Labour councillors joined in the laughter. It has to be said that Cllr Ohid has won more elections that Cllr Saunders in this borough, so he does have a popular mandate – and his English is probably better than Cllr Saunders’s Bengali, so Labour laughing at him does look rather patronising.

Mr Chowdhury came back to say that emergency funding had been made available to see organisations through, but what else could be done? Cllr Saunders said the emergency funding was controlled by the Commissioners too, and she offered no specific help at all.

Main Stream Grant Funding (2)
Mr Abu Hussain then asked the ninth question, which was on behalf of Thames Bengali Association, which had not been funded by the Commissioners. He asked if the Council would make officers available to help non-funded organisations find alternative funding or alternatives to funding.

Cllr Saunders said she could only give an answer which was similar to her answer to question 8. It was desperately sad, but she could offer little help or hope to organisations which had not received funding from the Commissioners. She said the Commissioners could be a source of help and advice and the Council could not give emergency funding, which was odd as it totally misunderstood the question. The Commissioners have taken over the Council’s grant awarding functions, but of course the Council could help community organisations by supporting them to look for alternative sources of funding.  Cllr Saunders took it the other way round, which was not what it said.

Mr Hussain said he had applied for emergency funding, although he had not had an answer to that application, but he really wanted to know how the new leadership intends to respond to the closure of non-funded organisations.

Cllr Saunders said if they had not heard an answer, she could chase this up and ask council officers to ensure that all those who had applied for emergency funding did at least get an answer. In terms of what the Council could do, it could not give out any grants. The Tower Hamlets Council for Voluntary Service (CVS) was there to give help and support and if there was anything practical they could do, the Council would do it – but they could not give grants without the Commissioners’ approval. This was again a rather strange this to say, as the question had not asked the Council to give out grants but had asked for practical help from officers. Cllr Saunders’s statement that the council could not give out grants was met with a little heckling from the opposition councillors’ benches – heckling pointing out that the Mayor had apparently been able to give the equivalent of a grant to the Rich Mix Centre, by writing off a loan of around £1 million (which, by implication, could have funded many of the un-funded organisations) – but Cllr Saunders did not reply. It later transpired that some officers have actually been communicating with groups and suggesting alternative funding bodies, so Cllr Saunders could have been a great deal more positive, if she had known that.

Mental health
In question 10, the last one to be taken, Mr Abdirashid Gulaid asked what the Council and its partners had done since signing the Time to Change pledge on ending mental health discrimination and stigma. Cllr Amy Whitelock answered: she was looking forward to working on this, as her new brief in the Council. She referred to the questioner as “Abdi”, which was rather familiar – unless she already knew him (and possibly even if she did). She said the Council had reviewed its own HR policy and done some awareness raising on mental health. There was a motion later on the agenda which, if passed, would commit the council to further work. (Would it? Surely this kind of work is delegated to the executive mayor and does not depend on a decision of the Council?) The questioner wanted joined up thinking between the Council and its partners – and with Social Landlords (surely not!).