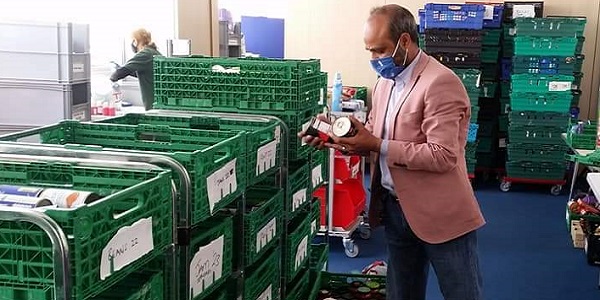 Redbridge Councillor clocks up a year of charity running

RUNNING 5km once a week for a year is no walk in the park – except in the case of Councillor Khaled Noor, who takes running 5k in his stride, whatever the weather.

Cllr Noor is a well known figure in East London: not only does he represent Barkingside ward on Redbridge Council, he is also the Principal of Blackstone Solicitors in Tower Hamlets and the Chair of the Muslim Professionals Forum.

It is not Cllr Noor’s first running for charity challenge. In September 2019 he completed 52 weeks of running at least 5km and raised over £1,200 for homeless charities. This year’s challenge was completed on 11th April, just before the holy month of Ramadan began, and was undertaken to raise money for those struggling to make ends meet during the Covid pandemic.

“I have donated about 1.5 tonnes of food and household items to the Redbridge Foodbank from the proceeds of my weekly charity runs,” said Cllr Noor. “As Ramadan was a special time of giving to those less fortunate, I delivered food parcels to Redbridge Foodbank on Saturdays. These gifts were funded by donations I received during my year-long charity run.  I appreciate all those who kindly donated and supported my efforts.”

Cllr Noor continued, “While Coronavirus does not discriminate in terms of whom it infects, the impact of COVID-19 is disproportionately high for Black, Asian and Minority Ethnic (BAME) communities. The Coronavirus crisis has exposed the underlying deprivation and inequalities in health and society that exist within the UK. Some ethnic groups are more likely to suffer economically than others from this Covid-19 crisis.

“Most of the pandemic restrictions have come to an end but we have collective responsibility to continue looking after those who are in need and vulnerable. It is our moral responsibility to do all we can to ensure that families and children are not going to bed hungry as parents cannot afford to put food on their plates.”

Cllr Noor also gave special thanks to the members of Jogging 4 Healthy Living, Redbridge, for their support and encouragement. Cllr Noor set up this Jogging Club as the legacy of his first 52-week charity run, which he completed in September 2019.