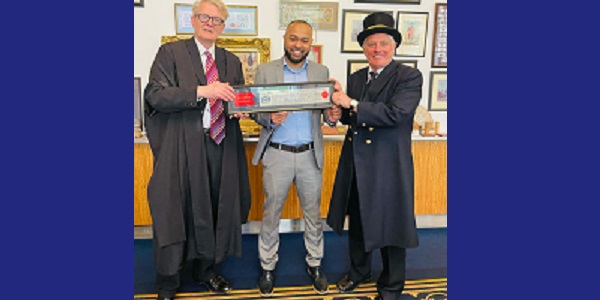 Shahin Uddin awarded Freeman of the City of London

NHS OFFICIAL Muhammad Shahin Uddin has been awarded the Freedom of The City of London by Alderman Vincent Keaveny, the 693rd Lord Mayor of the City of London, in a ceremony that dates back to Medieval England.

The original meaning of the Freedom of the City, which dates back to 1275, was that a Freeman was not bound to a feudal lord and could own their land and property. Freedom was required for anybody wishing to trade in the City throughout the Middle Ages, as it gave immunity from tolls at marketplaces and freedom from conscription into the armed forces. Although most of the practical benefits of having Freedom have vanished, it is still regarded as a privilege by those who are granted it.

Mohammed, of Bart’s Health, has been recognised for his services to NHS health services and for showing his can-do attitude – not just in the face of this once in a generation pandemic, but beyond.

After the ceremony at the Guildhall, Mohammed commented, “It has been inspiring to witness the courage and innovation shown by staff across the country, as they worked together to innovate and adapt to the constantly changing demands posed by COVID and are now putting the same energy and commitment into recovery from the pandemic. I am very honoured to be recognised by the City of London with such esteemed recognition. I want to dedicate this award to my colleagues across the NHS who have worked extremely hard during these difficult times.”

●Read more about it:
Rofikul Islam elected as new NHS Trust Governor
From clapping to campaigning for a fairer NHS