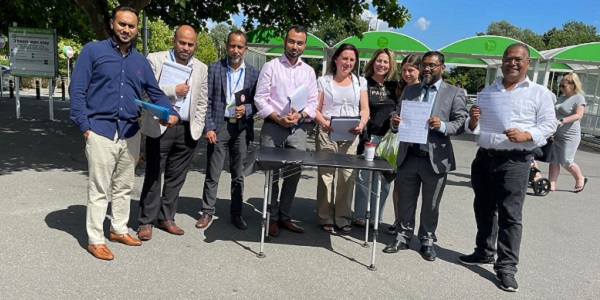 Aspire councillors and supporters gather to start collecting signatures for the TfL consultation.

IT’S OUT OF the Town Hall and back into the community for newly elected Aspire councillors in Tower Hamlets as, together with party activists, they have been trying to save the D7 bus from the Tory/Labour chop.

During lockdown, the numbers of passengers using Transport for London (Tfl) public transport fell, as many people worked from home or went on furlough. The buses and Tube service had to keep running, though – taking key workers such as NHS employees, frontline local government workers and other key staff to jobs on which the public depended, pandemic or not.

As passenger revenue fell, TfL appealed to the Government for emergency funding to plug the gap and keep services running. The Government paid up: but there were strings attached to the handout.  The most important one was that Transport for London should cut its services after the pandemic – by 4%.  TfL agreed.  In other words, one in 25 of every travelling member of the public would have to pay for keeping London on the move.

TfL has now announced which services are to go. In East London, the most shocking cut has been to the D7 route, which runs round the residential parts of the Isle of Dogs and then heads up to Mile End, is to disappear. TfL says that it will extend the 277 route to go round the Island, but as the D7 is being cut to save funds, it is impossible to believe the 277 will replace the D7 100%.

The D7 bus route is widely used by children and young people to go to and from school. Elderly people hop on the D7 to go to and from local GP services and to keep up a social life, avoiding loneliness and social isolation. Residents who work elsewhere in London travel by DLR or Tube to Canary Wharf and then hop on a D7 to get home. These journeys cannot be made on the DLR, which does not serve local residential areas. These bus users are about to be inconvenienced by cuts imposed by a Conservative Government and accepted by a Labour Mayor of London (whose father, ironically, was a bus driver).

As news of the cuts broke on 1st June, Deputy Mayor Maium Talukdar, who represents Canary Wharf ward on the Isle of Dogs, wrote to TfL protesting about the cut. Aspire Councillors were out in E14 too, collecting signatures to present to the TfL public consultation.

“This proposed cut is a disgrace,” said Deputy Mayor Maium Talukdar. “It’s terrible news for those who rely on the D7, and it’s going to make pollution worse, in a borough which already has poor air quality. Residents in Tower Hamlets have lower than average car ownership, so taking away our bus service is just no on. Residents are very angry and, as their newly elected councillors, we are going to ensure that these views are passed on to TfL.”

●To respond to TfL’s public consultation on cuts to bus routes, go to:
https://haveyoursay.tfl.gov.uk/busreview