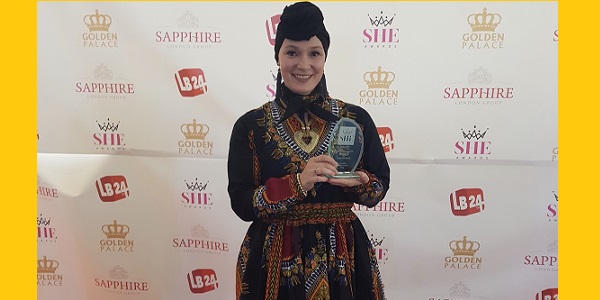 Lynne Northcott with her award

SHE Awards celebrate the amazing achievements of women

THE GOLDEN PALACE Banqueting hall in north London hosted a who’s who of men and women who came together for the unique purpose of celebrating a century since women first secured the right to vote in the UK.

The fantastic achievements of women were recognised with various awards celebrating their dedication to enriching communities and making a positive difference to life in the UK. The SHE Awards (Saluting, Honouring, Excellence) night was hosted by Musart Ellahi and celebrated the achievements of women from all walks of life over the last century.

Among the star-studded line up was Dagenham resident Lynne Northcott, who won the Community Champion Award. Lynne has been an active member of the community in Dagenham and Redbridge for many years. In the past twelve months in particular she raised over £17,000 for water wells in the Gambia with British charity Penny Appeal. Lynne organised different events which brought communities together, including a quiz night, afternoon tea and a community 5k run in Barking Park. The money raised went towards boosting her London Marathon sponsorship target.

Speaking after receiving her award a jubilant Lynne said, “During my training for the London Marathon I had spent hours on my own working through my emotions and experiences. As I crossed the line it felt as though I had pieced that very last bit of me together to become whole. I consider that a gift that I want to now share with others. I had a global community behind me and I want to thank everyone who has positively contributed to my journey.”

Inspired by her own love of running, Lynne actively encourages men and women to get moving. She inspires and documents her story on social networking as @Jogonhijabi. As a school-based counsellor, Lynne is particularly focused on sharing how important it is to take a holistic approach and she actively promotes running and sports as a way to improve mental health.

Lynne aims to promote mental health awareness in the running community and bring diverse individuals together through a shared love of running and sports. She is set on her new venture and as a newly qualified England Athletics Run Leader will soon be setting up running groups in Dagenham and Redbridge with a focus on uniting the mind and body.

•Read more about it:
Jog On Hijabi returns home for Great South Run
Jog on Hijabi on a mission for fresh water