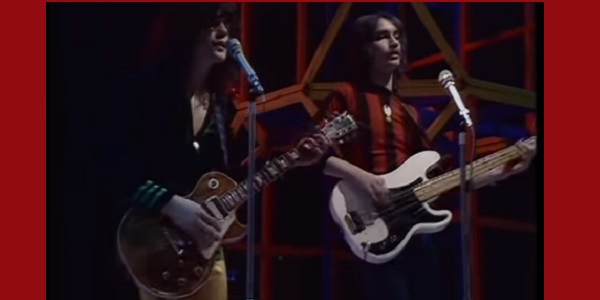 Marc Bolan and T Rex burst into 1971 with a Ride a White Swan, which reached number two in the Charts. On 16th March, they went one better: Hot Love reached number 1 (ending the two week reign of the dreadful Baby Jump). The group duly performed on Top of the Pops, with Bolan wearing glitter and satin. If Swan was the Glam Rock sound being born, Hot Love was the birth of the look.

It’s hard to say why the song was so enduringly popular.  Yes, it has a catchy tune that is hard to sit still to.  Yes, it has a good sound: prominent drums driving a guitar sound that is going places. It has Bolan’s “rhyme or else” naïve lyrics, which should make you laugh, but the seriousness with which Bolan delivers them stops the chuckle in your throat.

Perhaps there’s a clue in this video. It appears to be a live performance for TV rather than Top of the Pops, but the ToTP dance troupe (whichever one it was then) appear at various stages doing their work-outs in their scanty costumes. Take this visual and stop overlooking the lyric about “she” being “not very old” and you have to feel at least uneasy. In the week that we remember yet another woman being murdered by a man and women call for a sea change in public attitudes towards women’s safety, you have to point out how long this predatory culture has been going on. Fortunately, the experience of the oppression sows the seeds of the resistance.

Let’s take four and a half minutes off and enjoy Bolan & T. Rex’ first number one for what it is: a song of its time that was also heralding a new movement. And then let’s carry on the resistance.